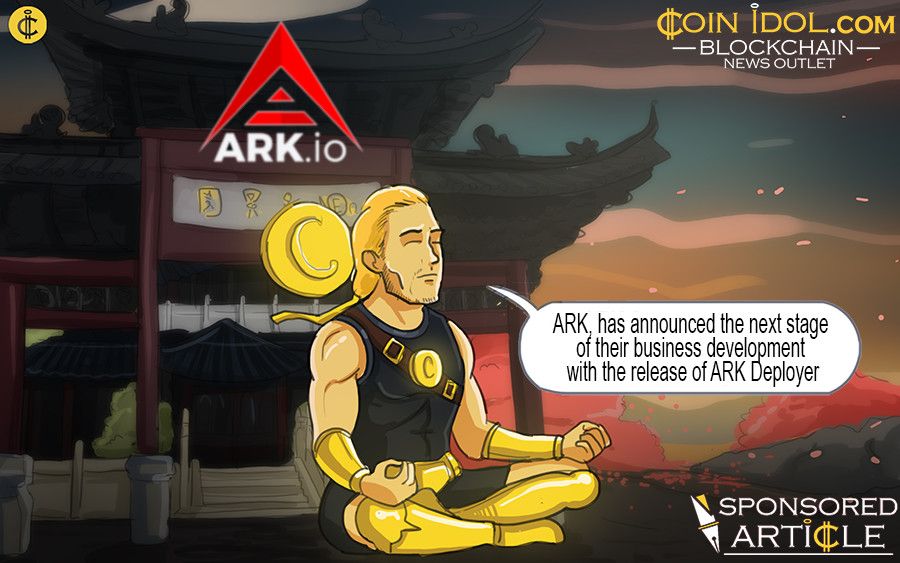 All-In-One Blockchain solution, ARK, has announced the next stage of their business development with the release of ARK Deployer, a lightweight script which helps to solidify the completion of their ‘Point. Click. Blockchain’ system.

ARK is a decentralized ecosystem designed to increase user adoption of blockchain technology with revolutionary concepts which include their custom built SmartBridge functionality which enables ARK to off-load non-essential functions to hundreds of side chains. ARK also have bragging rights to the fastest transaction times available with their rapid 8 second block times. In addition to this; the ARK Virtual Machine integration will allow users to issue ARK Smart Contracts.

The Crew Which Sails the Ark

The self-proclaimed “ARK Crew” are the group of innovative individuals fuelling the continual development and evolution of the ARK platform. The crew consists of 17 core members originating from 11 different countries making ARK a decentralized platform ran by a truly decentralized team. The crew’s diverse team is made up of experienced developers, traders, financial experts and much more.

Right now, each cryptocurrency runs on its own individual technology, making them incompatible with each other. ARK bypasses this problem by making the blockchain readily available and accessible to many consumers. ARK builds bridges to allow for the simultaneous utilisation of multiple blockchain networks by simplifying the process of having to endlessly trade coins to gain access to rival networks, for example the two major networks Ethereum and Bitcoin.

In short, through the ACES Project (Ark Contract Execution Services) the ARK network can interact freely with Bitcoin, Ethereum and Litecoin blockchains via its genius SmartBridge technology, giving ARK the immense power to utilise their features.

As the first step toward creating an extremely vigorous ecosystem, the ARK Deployer script gives enthusiasts the chance to begin learning the workings of the ARK ecosystem and familiarise themselves with the code. The code is now available for demonstrations through Hackathons and conferences, the script will allow the world to test the limitations of the of the blockchain ‘web’ that ARK so desires to produce.

Point. Click. Blockchain. Will allow you to create your very own connected blockchain, it will not be built on top of the ARK main blockchain, instead it will be built in parallel. Doing this gives you full control and customizability.

“Unlike Ethereum and ERC20 tokens all ark cloned chains can have their own blockchain that will be connected to the ark ecosystem. They will be customizable, you can set your blocktimes, number of delegates, and more. This gives you complete freedom and independence without bloating the ARK mainchain, but while still having the ability to utilize the entire ecosystem”.

A start-up company can benefit immensely from the ARK Deployer script and begin to build their own blockchain network, one that offers a single truth source. Doing so reduces the reliance on costly intermediaries that tend to increase business costs and generate time wasting inefficiencies.

The future of ARK with this recent update is promising to say the least, more excitement is to be expected with the ARK Crew firing on all cylinders; propelling the ARK’s engine ever forward and continuing to push the boundaries of blockchain technology and elevate ARK to new heights.