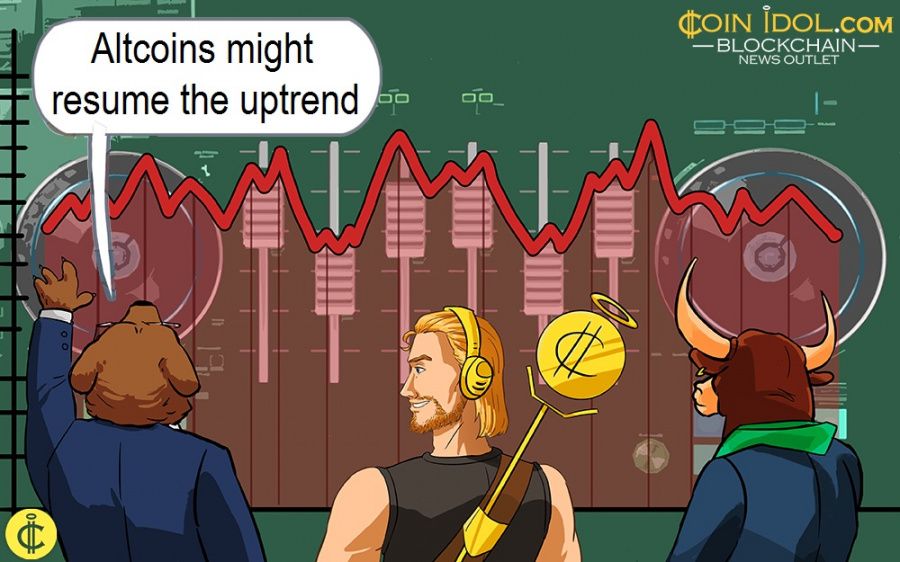 Stellar is consolidating between $0.0035 and $0.0045 after the last breakdown of March 12. Before this time, the market has been in a sideways move since July 2019. Stellar has been trading below $0.0900 resistance. The bulls have not been able to trade above the resistance since the inception of the sideways trend. In February, the bulls made an unsuccessful attempt to break the resistance. Buyers were resisted and the XLM resumed a downtrend. The market fell to a low of $0.03254 and resumed a consolidation above $0.0035. The uptrend is currently facing resistance at $0.045. A break above $0.045 resistance will propel the XLM to resume an uptrend. A successful break will push the market to reach a high of $0.050 or $0.060 price level. 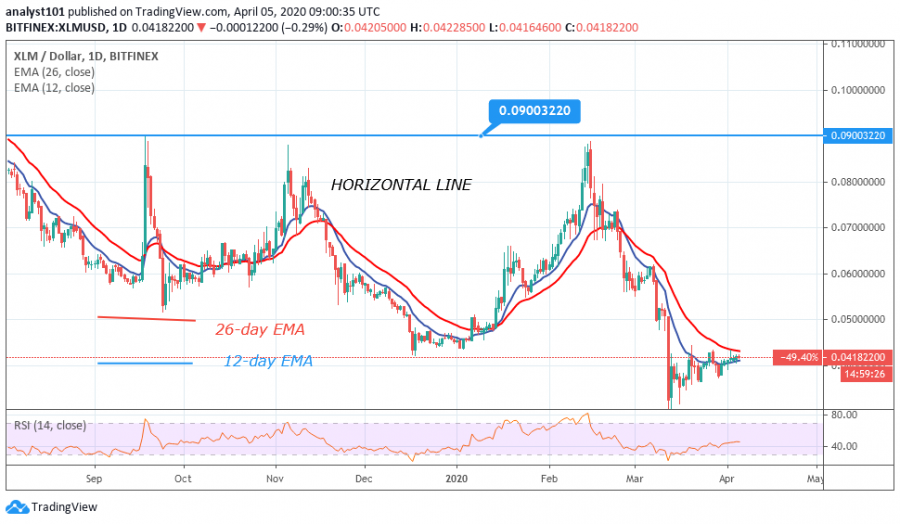 Monero is in an uptrend after the last bearish impulse on March 12. Interestingly, the bulls have broken the resistance line of the descending channel. The implication of this breakout is likely to be a change in trend. Unfortunately, XMR is facing resistance at $55. Monero is likely to move up to the high of $65 if the current resistance is breached. However, Monero is above 88% of the daily stochastic. This indicates that XMR is in an overbought region of the market. In the meantime, sellers have emerged to push XMR downward. Monero is likely to drop to $50 low from the overbought region of the market. 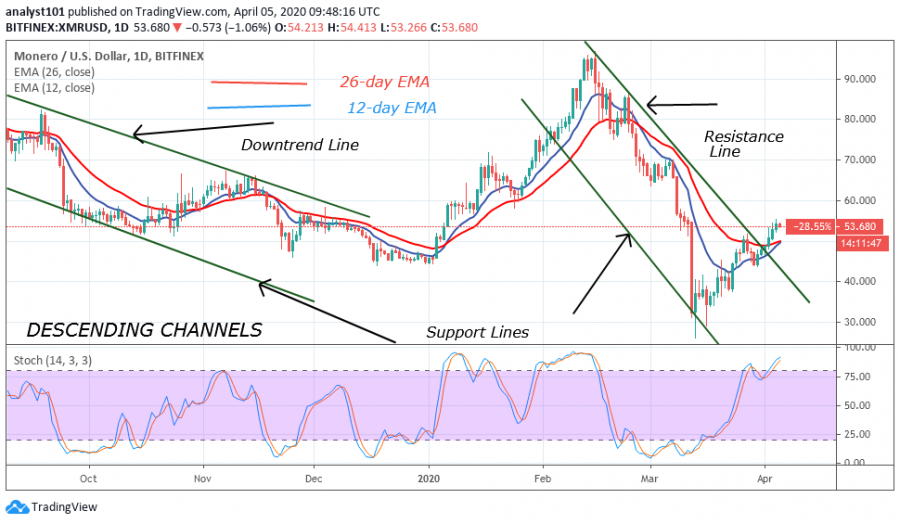 Tezos is consolidating between $1.40 and $1.80 after its last breakdown on March 12. The pair is currently facing resistance at $1.80. The bulls have made unsuccessful attempts to break $1.80 resistance. A successful break above $1.80 will propel Tezos to reach a high of $2.40. Nonetheless, buyers are approaching the resistance line of the descending channel. Positively, a break above the resistance line may bring a change in trend. Meanwhile, Tezos is above 50% range of the daily stochastic. This indicates that the market is an uptrend. 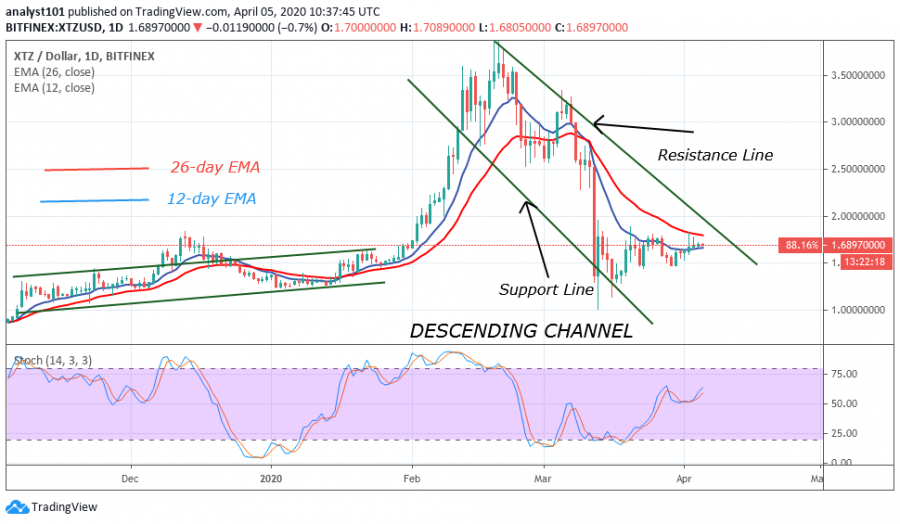 Maker is currently in a bear market after the bears broke the $400 support on March 12. Before this time, Maker has been in a sideways trend since July 2019. Recently, the bears broke the $400 lower price range as the market fell to a low of $200. After a retest at the $200 support, the market has made an upward move and it is approaching the resistance at $360. A break above $360 will return MKR to the range-bound zone. MKR has risen to level 45 of RSI. It implies that the pair is in a downtrend and beneath the centerline 50. 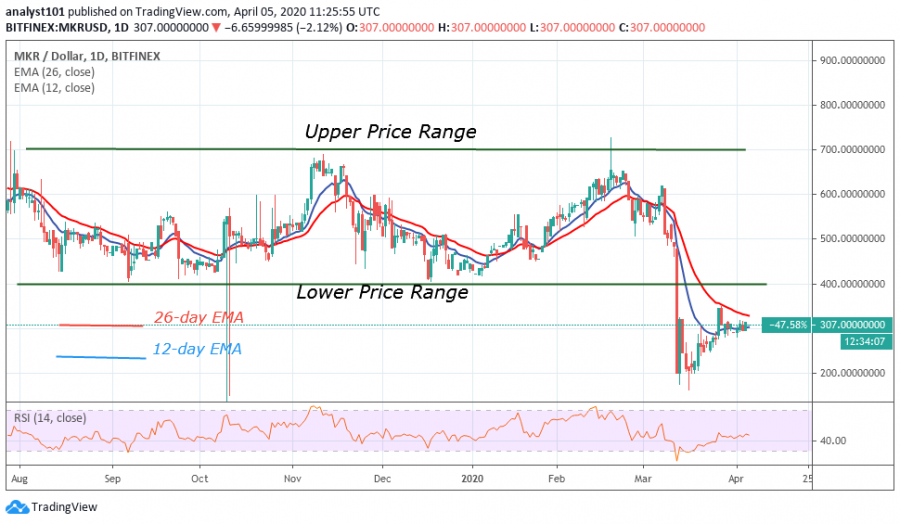 Binance Coin is in a bear market. BNB dropped to $6.41 low after the last bearish impulse. The market is currently making an upward move as the support at $8 holds. Binance Coin is presently facing resistance at $14. Probably, an uptrend is expected if the bulls break the resistance at $14 and $15. The market is expected to rally above $17.50. BNB is above 60% range of the daily stochastic and approaching the overbought region. 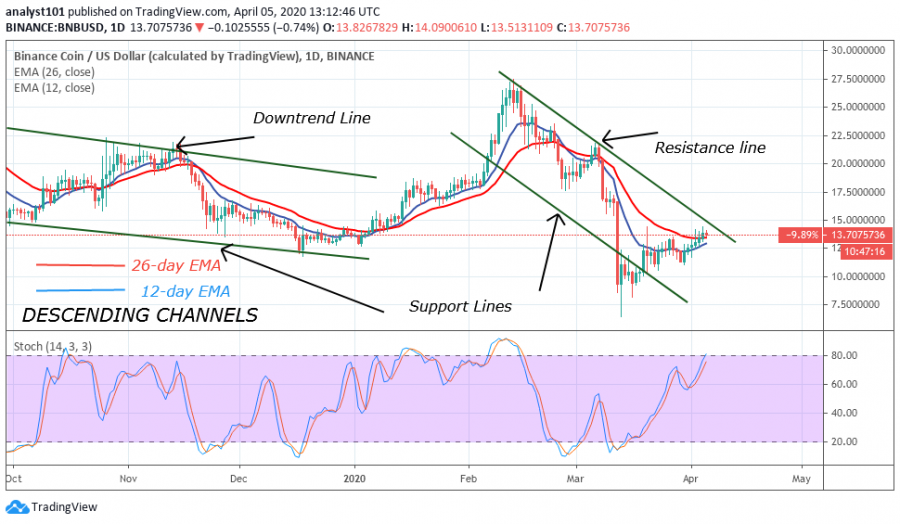