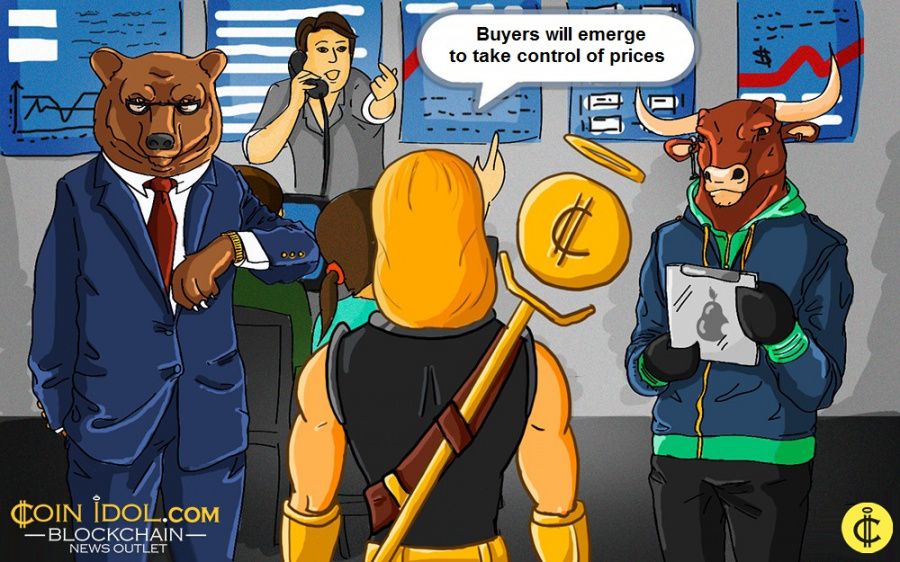 LUNA, GMT, APE, KAVA and XEM are trading in the oversold regions of the market. This means that the downtrend has reached a final stage where buyers will emerge to take control of prices.

The cryptocurrencies with the worst performance have fallen significantly. Let us take a look at these cryptos and see their recovery.

Terra (LUNA) is in a downtrend and the cryptocurrency has dropped significantly to a low of $29.50. In the previous price action, LUNA traded and peaked at $117.29 on April 4. Bulls failed to sustain the bullish momentum above the recent high. The altcoin was pushed back and fell to the low of $77.

LUNA took an upward correction but was pushed back at the high of $100. As a result, the altcoin fell drastically to a low of $28.33. There is a probability of further downward movement of the altcoin.

Meanwhile, the downtrend from April 18 has shown a candlestick testing the 61.8% Fibonacci retracement level. The retracement suggests that LUNA will fall to the level of the 1.618 Fibonacci extension, or $51.17. From the price action, LUNA has fallen below the Fibonacci level. The altcoin is the cryptocurrency asset with the lowest performance in the past week.

It has the following characteristics. 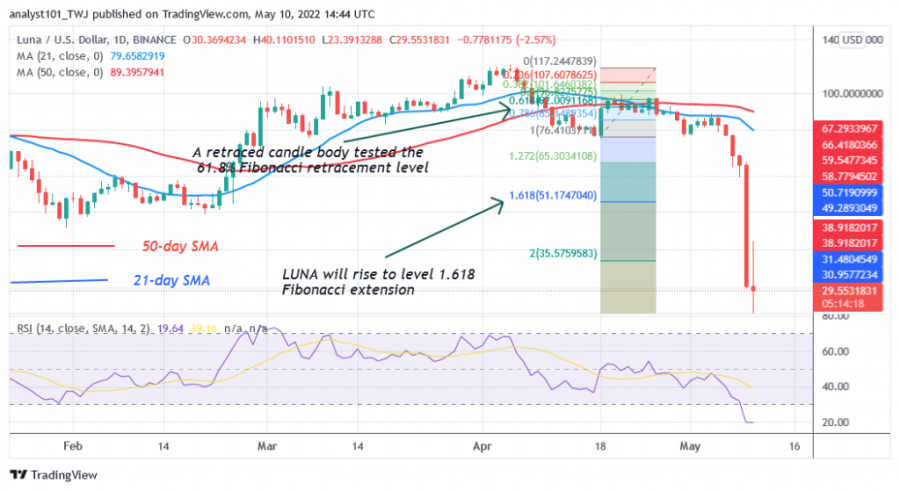 STEPN (GMT) is in a downtrend as the altcoin has fallen below the moving averages. The altcoin has fallen from the overhead resistance to the low of $1.74. The current decline has reached the 32 level of the Relative Strength Index for the 14 period. Altcoin is approaching the oversold area of the market. The current downtrend is likely to subside. The market will rise again if the current support holds. Altcoin is the cryptocurrency asset with the second worst performance at the moment. 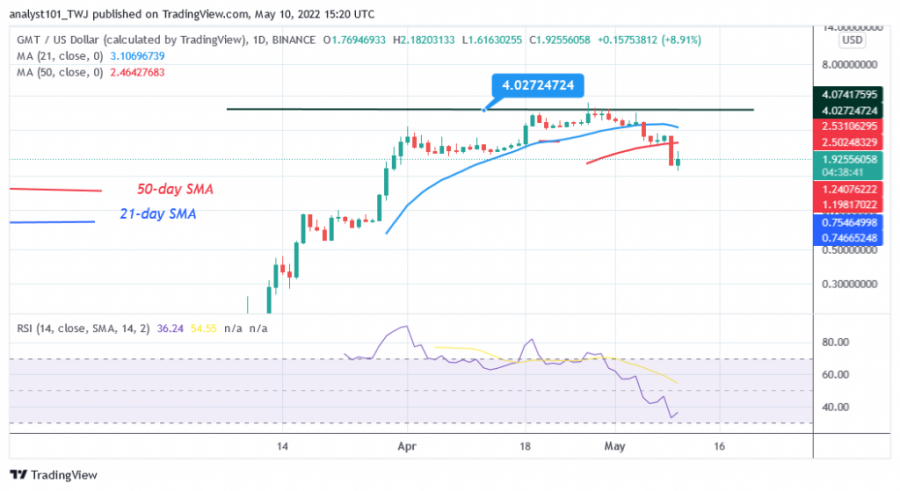 ApeCoin (APE) is in a downtrend and dropped to the low of $7.79 on May 10. In the previous price action, the cryptocurrency rose to a high of $27.62 on April 28, and the uptrend ended as the market reached an overbought zone. Today, APE has dropped below the moving averages.

It is below the 20% range of the daily stochastic. This suggests that the market has reached bearish exhaustion. Selling pressure is likely to ease when the market reaches the oversold zone. ApeCoin is the cryptocurrency with the third worst performance this week. 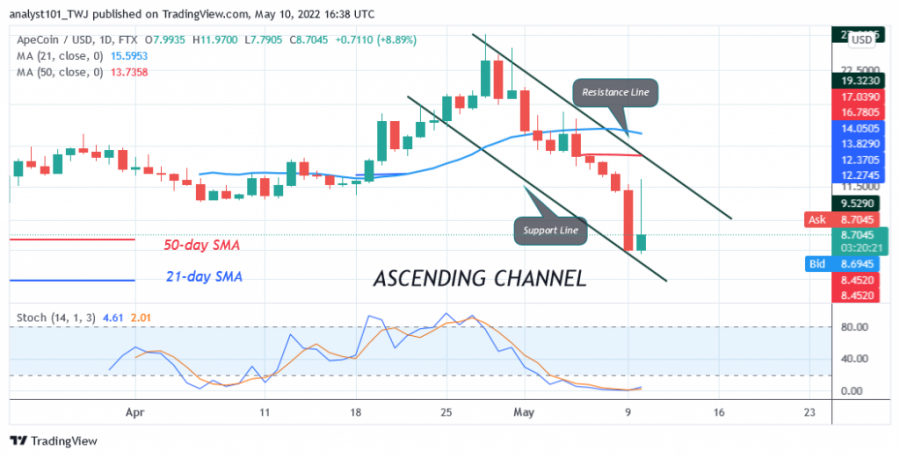 Kava (KAVA) is in a downtrend after being rejected at the $5.63 resistance level. The cryptocurrency fell below the moving averages and reached the low of $2.6. Meanwhile, the downtrend from May 2 has shown a candle body testing the 61.8% Fibonacci retracement level. The retracement suggests that KAVA will fall to the Fibonacci extension level of 1.618 or $3.11. The price action shows that KAVA has fallen below the 1.618 Fibonacci extension. It is likely that it will fall further down. It is the cryptocurrency with the fourth worst performance in the past week. 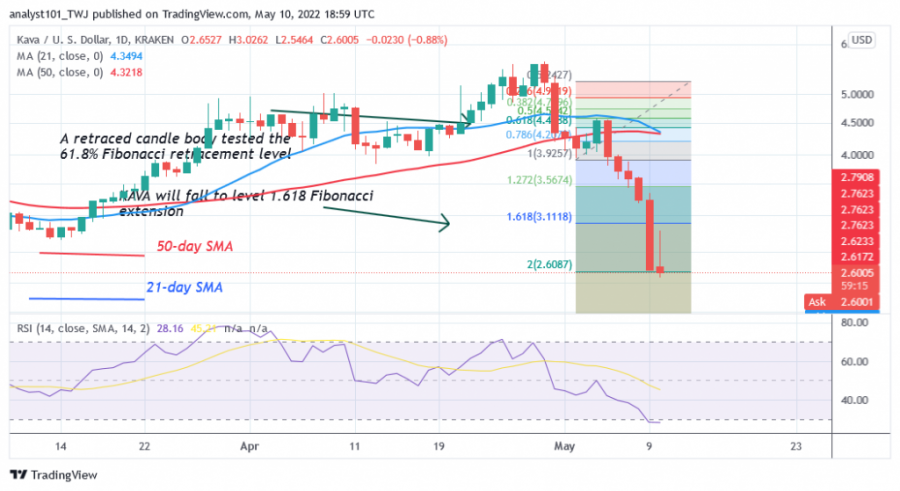 NEM (XEM) has been in a downtrend since September 5, 2021. Today, the cryptocurrency fell to the low of $0.055. The altcoin was heavily oversold as it fell into the oversold zone of the market. The altcoin will resume its uptrend if the current support holds. XEW is at level 21 on the Relative Strength Index for period 14, indicating that the altcoin is in the oversold region of the market. Buyers will emerge to push prices higher. XEM is the cryptocurrency asset with the fifth worst performance last week. 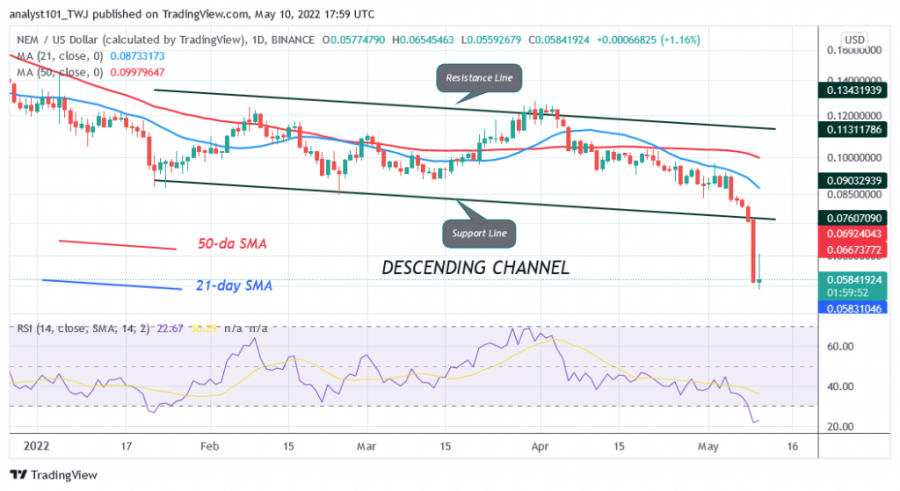