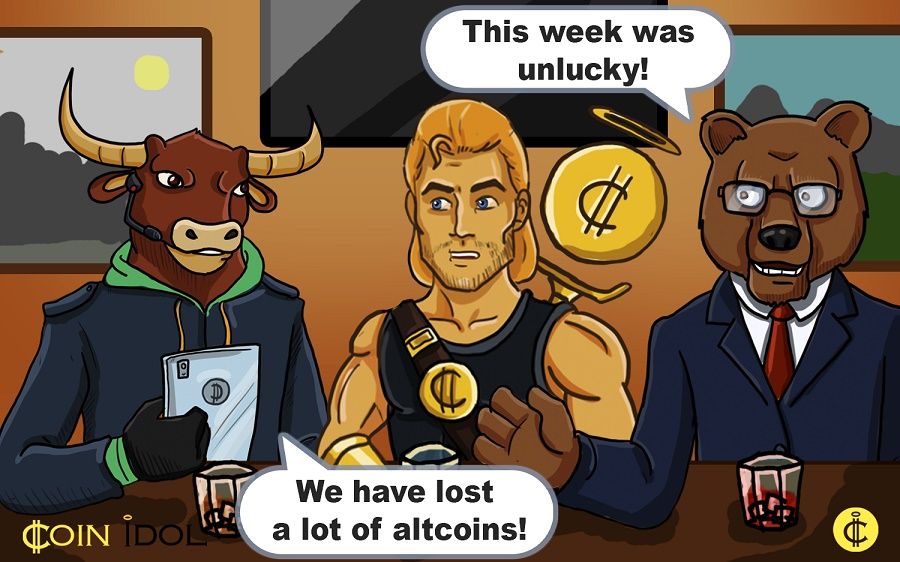 This week holders of altcoins suffered losses, as all altcoins except Ethereum lost in the price. The more altcoins are produced, the less popular they are.

Demand for altcoins decreased significantly, while the offerings are growing. Under such circumstances, those who enter the market and buy altcoins today, do so at a risk. However, to a lesser extent this applies to owners of Ethereum coins, as ETH managed to regain a little of what was lost last week. But maybe this is just an exception to the rule that proves the rule itself.

Many investors see that some of new altcoins may be a scam. After all, investors have no proof of the reliability of such coins and it is kept only on investor confidence. But this week, as we have seen, the confidence of investors was clearly not on the altcoins side. While there were no cases of cryptocurrency scams, this doesn’t deny the possibility of one.

Only ETH/USD exchange rates showed strong growth this week. It hasn’t reached the maximum of $20 that it was at in June, but the trend is to this target price. The reasons for this growth are the great prospects for Ethereum and the recent announcement of the Hard fork.

Ethereum could now become a viable alternative to Bitcoin, and even go to the same price levels. But that depends on the developers themselves. The market is sensitive to long-term investment and technological products.

Next week Ethereum celebrates its first anniversary on July 30th. We expect continued growth of the ETH price and a return to levels of $18 - $20. The level of support is $12.5.

LTC/USD lost last week in price due to a variety of adverse factors, which also influenced the prices of all altcoins. Litecoin needs a strong impetus to grow, such as the growth of Bitcoin price. After all Bitcoin is the main driver of prices for all altcoins. Next week, we expect passive trading on the level of $4.0 - $4.20.

The DOGE/USD exchange rate was depressed all week. The result – the lowest price for July. DOGE is not in great demand among investors. Dogecoin is interesting for micro payments, when you need to transfer a little money. But even this function is not in demand among users.

We asked the experts about the price decline seen this week while ETH price was growing all week. Why? And received this answers from Daniel Dabek, founder of Safe Exchange, curator of Alt Coin Trading Community:

“There's actually recent phenomenon today where all (7500 btc) bitcoins available for borrowing to trade on margin were occupied. So, there is a major margined pump happening on Ether at Poloniex that started last night. I think that this is ahead of the interface release for DAO conversion to ETH directly from Poloniex.”