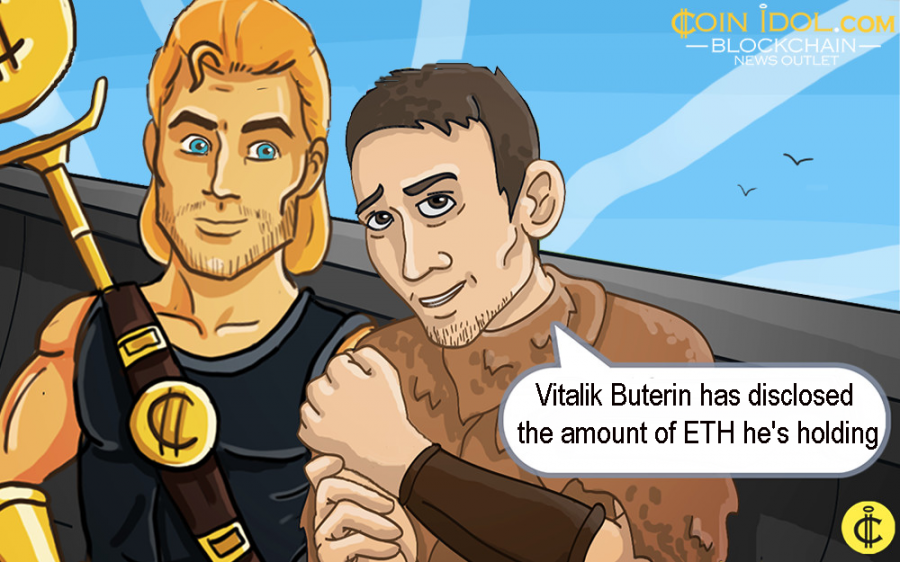 Vitalik Buterin, the founder of the Ethereum (ETH) blockchain, has disclosed the amount of ETH he's holding. Vitalik reacted to accusations by NYU economist and critic of digital currencies Nouriel Roubini, who tagged Vitalik and ETH cofounder Joseph Lubin as great thieves and illicit scammers.

“I never personally held more than ~0.9% of all ETH,” said Buterin in a tweet. “My net worth never came close to $1b. Also, I'm pretty sure there are no criminal laws against pre-mining.”

Hours later Vitalik issued a statement with detailed data on all his trades and holdings. From the statement, Vitalik holds less than 365,003 ETH, which is worth no more than $73.7 million. During ETH's apex last year, that amount would have been worth over $500 million, but according to Vitalik, he had 'significantly no more than 0.9%' of all Ethereum at the moment.

Vitalik did ratify he has other addresses but said they are 'somehow small' compared to the one he shared. He further indicated the ETH Foundation presently holds almost $660,000 and has a maximum owned almost $3 million.

Nicknamed 'Dr. Doom' for forecasting the 2008 financial crisis, Roubini then indicted Vitalik of nauseous actions after the ETH founder tweeted a forecast for a financial crisis 'sometime between today and 2021'. Vitalik's statement appeared to be a blow at financial apocalyptics who endeavour to forecast financial crises.

“Not because I have any special knowledge or even actually think that, but so that I can have a ~25 percent (or whatever) chance of later being publicly acclaimed as ‘a guru who predicted the last financial crisis.”

Nouriel reacted to the tweet, telling Vitalik to 'just shut up' and judging him for not working on his promises of Proof of Stake and a 'resizable, decentralized and secure' system. After Vitalik's reaction, Nouriel continued to battle the digital currency ecosystem at large, using the current fall in prices as an argument.

During the fiasco, Nouriel was highly targeted by diehards and fans of ETH and Buterin, who battled him on Twitter for his alleged 'lack of expertise'. Nouriel was scheduled to debate Coin Center on October 12 at a congressional hearing on digital currency.

Tags
Ethereum Vitalik Buterin Digital currency Blockchain Finance Crisis Million Forecast
Most Popular
May 12, 2021 at 15:03
News
Cardano Consolidates Below Recent High as Bulls Attempt to Breach $1.80 Resistance
May 12, 2021 at 14:03
News
Most African Countries Cannot Access Akoin. How True is the One Africa, One Koin Sentiment?
May 12, 2021 at 14:00
PR
Spring and Bondly NFT Partnership Unlocks Digital Potential for Creator Economy
May 12, 2021 at 12:59
News
Bitcoin Cash in Sideways Move, Battles Resistance at $1,600
May 12, 2021 at 11:26
PR
XRP is Back on Track on Phemex
More