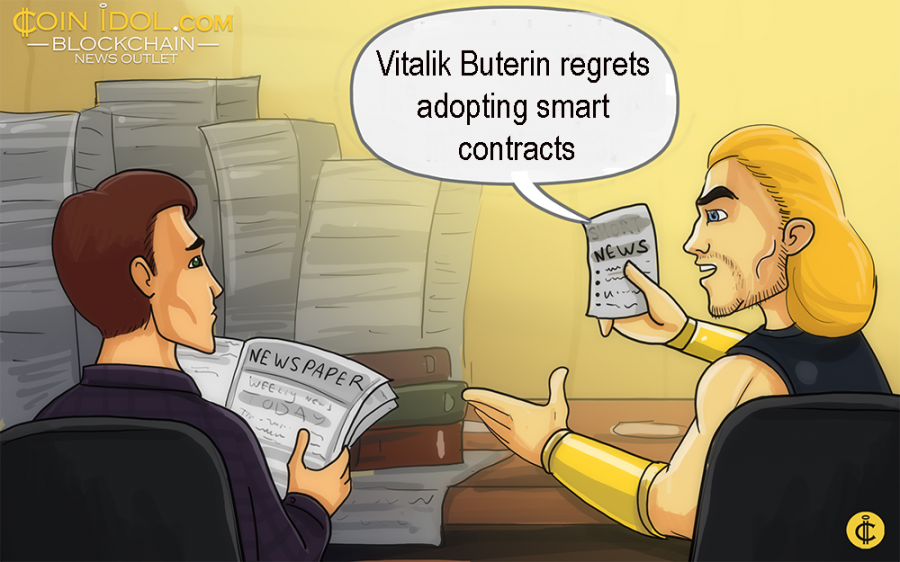 In a recent tweet, Vitalik Buterin, Ethereum (ETH) developer, acknowledges: "I quite regret adopting the term 'smart contracts.'" He elaborates in the tweet that he should have named it "something more boring and technical."

“To be clear, at this point I quite regret adopting the term "smart contracts". I should have called them something more boring and technical, perhaps something like "persistent scripts".

Buterin's tweet is a reaction to the account CleanApp, which was debating the abstraction of "Cryptocurrency Law." Here, CleanApp gives full details of what they think of governance structures, and the way digital smart contracts will engage with non-fictional implications. After mentioning smart contracts, Buterin tolls in to show and explicit his regret, revealing he'd forechoose if smart contracts were named "persistent scripts."

This is an illusory trial to change "smart contracts" away from rightful documents, and into programs which will run "persistently." In 2017, smart contracts have been all the rage. ETH was a story of success last year, blasting in price from $8 to $1,400 each ETH.

This increase led groups to attempt to imitate ETH's model. Smart contract tokens began appearing all over the place. Neo, Lisk, WanChain, From, Cardano and EOS are some of the hundreds of smart contract platforms which were rolled out.

Buterin's tweet was in reaction to a long piece by CleanApp about distributed ledger technology (DLT) governance. DLT maniacs always argue if or not the DLT should ever be revamped, or who exactly should do that decision. This topic enlightens if transactions can be revamped for "ethical reasons."

Digital currency governance has been a sultry thread of discussion ever since ETH's DAO hack led to a hard fork. And during this pickle, the ETH ecosystem considered to postpone the chain and offer back any hacked coins to the people who fell victims of the deadly hack. This was a bullish contentious effort, and those that didn't harmonize with the chain postponed hard-forked to develop ETH Classic.

After The DAO deadly hack, several commentators began querying which actions would value censorship on the DLT. If this can be successfully applied for the victims of The DAO, then why not other people? As per now, there haven't been any more chain slide trucks, but the thread remains famous as recent debates on Twitter alluded that Buterin would deem postponing the chain if need be.