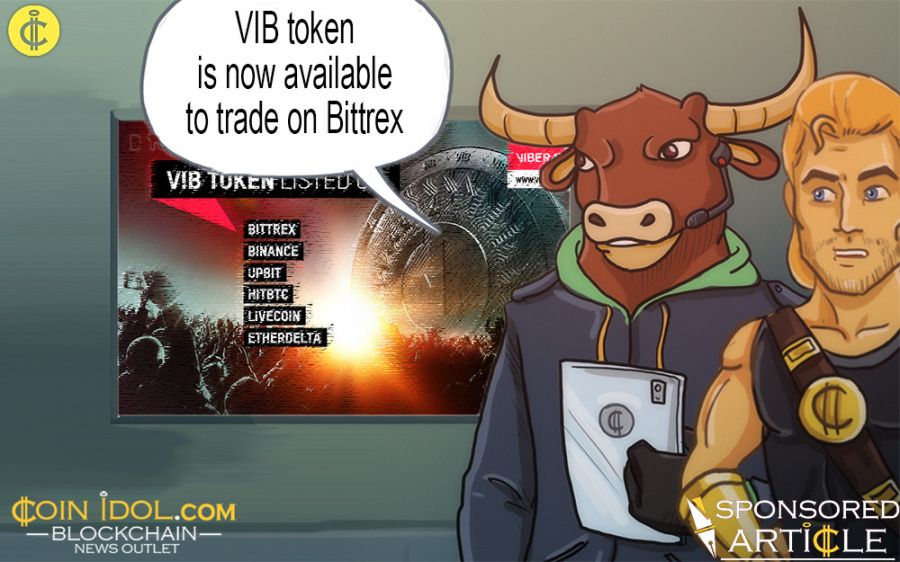 The token for the live music industry, $VIB, is now available to trade on Bittrex, the world's third biggest exchange according to Coinmarketcap, following the recent listings on Binance, UpBit and HitBTC.

Wednesday was a big day for the Slovenia-based music startup that sold out their ICO in under 5 minutes.

"Bittrex is of course the logical step for any serious cryptocurrency. Working with them has been a delight and we are happy have their support. Having our token listed on such a big and reputable exchange only proves that the stakeholders in this industry believe in our project and share our vision. Our token holders kept asking us when we'll have the token listed there, because they wanted an exchange with a high volume. With the help of our advisers we are now happy to ring the bell and start trading at Bittrex."

Charlie Shrem, the startup's most well known adviser, played an important role in getting the coin to one of world's top exchanges. He thinks that the two companies working together is something that had to happen: "I’m happy to help use relationships to further more business in benefit of the greater community. Viberate is an amazing project and Bittrex the best exchange, of course they would be together." The company also announced that they are extending their relationship with the Bitcoin Foundation founder, who remains on board as an adviser, helping the team with his wide network as well as with day-to-day operations regarding the Viberate token. The first major upgrade of the token and the platform Viberate.com is due in the coming weeks and will allow anyone to earn VIB tokens by contributing content to the platform.

Landing the VIB token on a big exchange however won't be the payday for founders and the team. Their personal tokens are vested for a 2-year period with monthly cliffs. Gregorcic pointed out that they want to lead by example:

"Personally, I don't think that any of our employees, who have tokens, would dump the whole stash. We have the best team in the world and we all believe we'll truly rock the music world to the very foundation. Holding on to precious coins is in everyone's best interest, so fear of dumping wasn't the reason why we decided to reverse vest them. We wanted to show that this is how it should be done, because we saw one too many bad examples of company's tokens being dumped in the eyes of contributors who trusted the project with their own money. We're even slightly adjusted our smart contract in order to show exactly how many tokens vest each month, so anyone can check on us."

Tags
Token Bittrex Exchange Music Industry Coinmarketcap Trading Binance
Most Popular
May 13, 2021 at 15:37
News
Binance Coin Drops to Previous Range-Bound Zone, Unable to Sustain Above $700 High
May 13, 2021 at 14:57
News
Bitcoin Plunges below $50K Support Level as Bears Threaten to Short to $44K Low
May 13, 2021 at 14:03
News
The e-Commerce market is Vulnerable to Fraud and Merchants Are Unprepared to Prevent it
May 13, 2021 at 11:05
News
Giant Telecom Companies Turn to Blockchain to Speed up Technological Progress
May 12, 2021 at 15:03
News
Cardano Consolidates Below Recent High as Bulls Attempt to Breach $1.80 Resistance
More