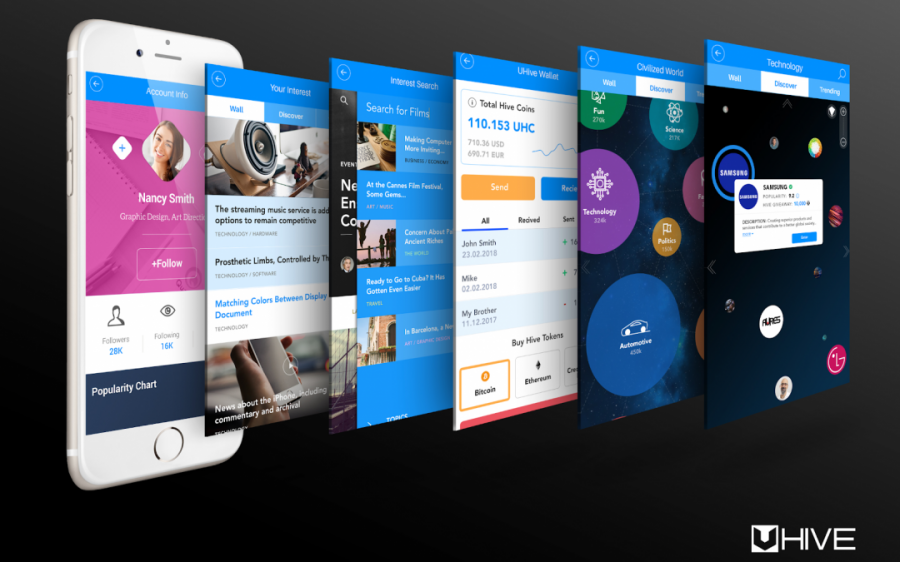 A novel social media network introducing its innovative hybrid centralized/decentralized concept is poised to inaugurate the new digital life era. UHIVE, the project that is being developed by UHIVE Ltd., is about to reach its next milestone, which is the launch of its Pre-TGE and Crowdsale TGE for its proprietary, eponymous digital token (UHIVE).

UHIVE tokens are the fundamental currency powering the UHIVE social network, which has been described as “a new hybrid blockchain system which uses the best of both worlds (centralized and decentralized)”. More specifically, the UHIVE social network will be comprised of two worlds, the Civilized World, and the Grey World, which differ in terms of governance, freedom of expression, and even the presence of an element of surprise.

On the one hand, and in terms of the Civilized World, UHIVE creators have adopted the model of current, civilized societies in terms of rules and governance, to create a centralized online space where users have their individual profiles (walls-spaces) and connect with others while sharing their personal information, interests, and affinity for certain spaces on the network (e.g. “fashion”, “politics”, etc.)

On the other hand, the Grey World is a wholly anonymous and non-regulated blockchain-powered space where members can freely express their thoughts and feelings, and create undisclosed groups where they can mingle with other, anonymous members. Since the Grey World is largely uncharted, users will be able to stumble upon areas by chance, and discover new things that might interest them.

“UHIVE is the first social network built from the start to be mobile-based and support Virtual Reality, while it is also the first of its kind to be controlled by advanced A.I. technology.”

“Our goal is to add a new, intuitive dimension to social networking, where users can find things that interest them beyond using keywords, hashtags and suggestions – which is what they have been doing so far. UHIVE community members will be able to discover communities based on their interests, and zoom in and out of spaces that draw their attention, much like when our eyesight does in real life when we find something intriguing. UHIVE’s smart A.I. algorithm will evaluate spaces based on traffic, audience engagement and affinity, and create a thriving “real estate” scenery, which individuals and businesses can take advantage for promotional purposes, or flip in exchange of lucrative payments in UHIVE tokens.”

The UHIVE platform adds a new dimension to digital marketing, offering significant benefits to marketers, influencers, and consumers alike. Brands and strategists will now have the chance to select UHIVE spaces with high traffic, as well as influencers-members of the UHIVE platform, to target their audiences with improved specificity.

What’s more, a significant portion of the UHIVE advertising revenue will be given back to UHIVE social network users, in the form of UHIVE tokens, so as to contribute in sustaining the UHIVE economy, create user loyalty, and organically promote the token’s growth.

A maximum of 3 billion UHIVE tokens will be made available for purchase during the company’s Pre-TGE, which will take place April 11, 2018 – April 30, 2018;while a further 14 billion in total will be up for sale during the company’s Crowdsale TGE, from May 2, 2018 – July 15, 2018. During the latter, the company will also be awarding a total of 3 billion tokens in bonuses to UHIVE token buyers, bringing the total of UHIVE tokens released during these two phases to 20 billion. The remaining 60 billion out of the total 80 billion tokens issued are expected to be released to exchange platforms, to the UHIVE team and company advisors.

UHIVE has shared that the UHIVE beta app release for Android and iOS is expected sometime in October, 2018.

UHIVE currently runs a promotional offer, giving 1,000 to 10,000 free UHIVE tokens to anyone who joins its Telegram group and remains a member of it until the end of the company’s TGE.  Those interested in doing so can join through here.

UHIVE is the source of this content. This press release is for informational purposes only and should not be viewed as an endorsement by CoinIdol. We take no responsibility and give no guarantees, warranties or representations, implied or otherwise, for the content or accuracy. Readers should do their own research before investing funds in any company.