Tokens: a Speculative Money-Making Tool or a Smart Asset? 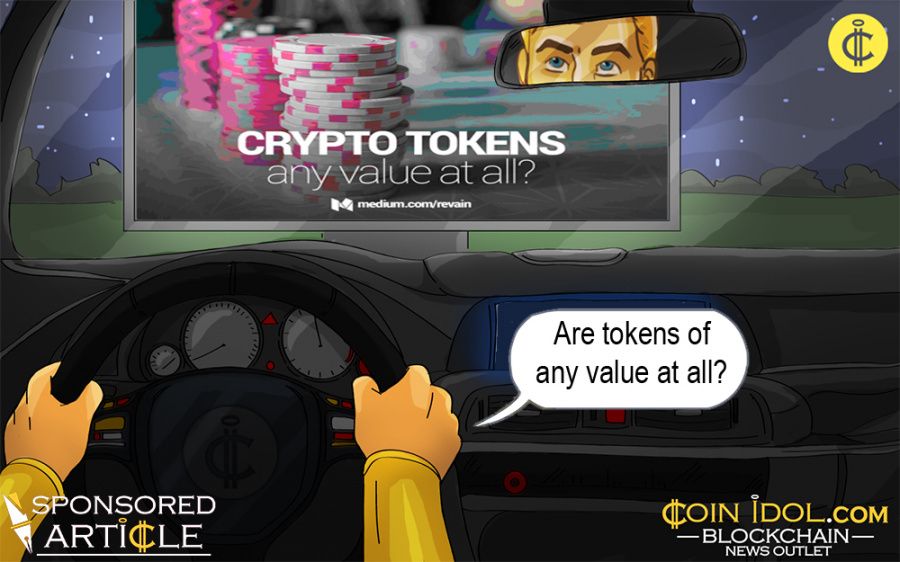 In the age of post-industrial economy, the whole concept of money and general economic values is again under consideration.

Concepts of private money and smart multifunctional assets, i.e. assets with multiple payment functions, are stirring the minds of entrepreneurs and researchers powering up the idea of virtually building a business from the scratch without the burden of making significant monetary contributions on the founders’ part. First, digitization of economy introduced us to new ways of making payments in a matter of seconds via established PayPal-like networks. Now, about ten years later, the blockchain technology is paving the way for a new type of economic asset — a digital token — that appears to be a perfect payment tool for the era of sharing economy. The asset value is mostly determined by the amount of exchange options, i.e. how many goods / services or other sorts of benefits one can get in exchange of the asset. And token seems to be a perfect tool here. That’s why we typically see all types of perks given to the users as an incentive for participating in utility-token platforms. Essentially, here we are talking of closed systems of private money created by businesses and run on smart contracts. Hence, the whole concept of private money and token economy describes micro economy models that are designed to fuel a digital business. 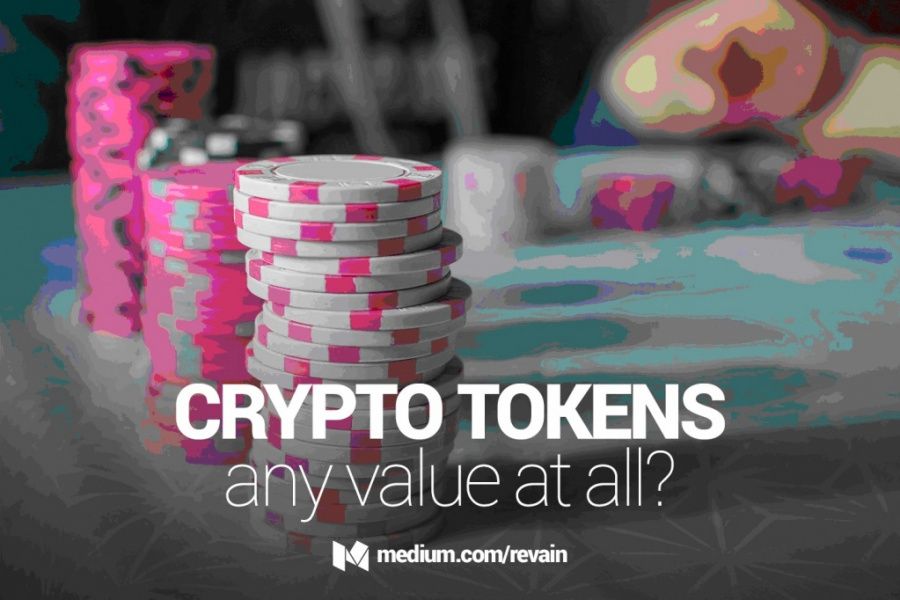 However, there is a bit of confusion when it comes to distinguishing between an asset’s value and price. To stretch the previous analogy with traditional economy where for many years an asset price at the market was driven by the company’s performance and revenue, which is no longer the case. Look at Tesla underperforming over the course of the last year, yet Tesla shares are reaching market heights. Actually, in digital realm of sharing economy things are getting even more complex: a token price is barely dependent of company’s internal processes. Yet, in a perfect world a token price is backed up by economic value and market speculation should barely affect it. Ultimately, there are three objective technical factors influencing the price:

It is a logical leap to suggest that a token’s value is a combination of economic and social factors determined by correlation of certain criteria. This set of criteria applies in different proportions depending on token type whether it is performing as a utility, currency, an asset or equity. In all respects, first and foremost come token use cases within a micro-economy system. It is essential that token circulates naturally in blockchain internal platform and is adequately integrated into business processes. A valuable token would be generating extra value to all the internal system’s participants serving some sort of incentive that is able to attract newcomers - therefore expanding the user network. As we all know, the community is the king in crypto. Then open circulation process comes into play: a token should be easily exchangeable to both digital and fiat currencies. Lastly, a valuable token is appealing for investment in the long-term. For a utility token, for instance, the value is coming from the adoption and usage of the network and the amount of information that it’s being processed through it as there are parties willing to pay transaction fees. A typical example here is decentralized exchanges or businesses putting supply chain data on blockchain, etc.

Looking back now at many of the ICOs of the year 2017, the implications of this paradigm are a bit troubling: a lion’s share of token-fueled businesses are not really offering any product or utility, yet the coins are traded on hype developing billion dollars market caps. How come? Tracing down the correlation of token economy model and the token price dynamics might be of real interest here. Revain, for instance, appears to be the first ever blockchain-powered platform for immutable and fair reviews with user community incentivized by payouts for the reviews they write. The platform has rolled out a few beta-versions and appears to be following the roadmap properly. Revain is featuring two token types: a tradable external R and an internal RVN with a major goal of stabilizing the internal token independent of the external token price fluctuations. A token economy model that is basically generating the profit for the platform is designed in the following manner: the more reviews a business wants to get from the users, the more it has to pay. That said, it is only natural that the business would sooner than later run out of RVNs to fuel the flow of reviews and will be needing a ‘refill’ and ultimately buying more Rs. Another thing is that review prices differ depending on their amount and the user’s rating. There is a precise mathematical formula for making the calculation: y = (e/2.65)^(x-1) Let’s build a graph showing the correlation of the price and the amount of reviews: 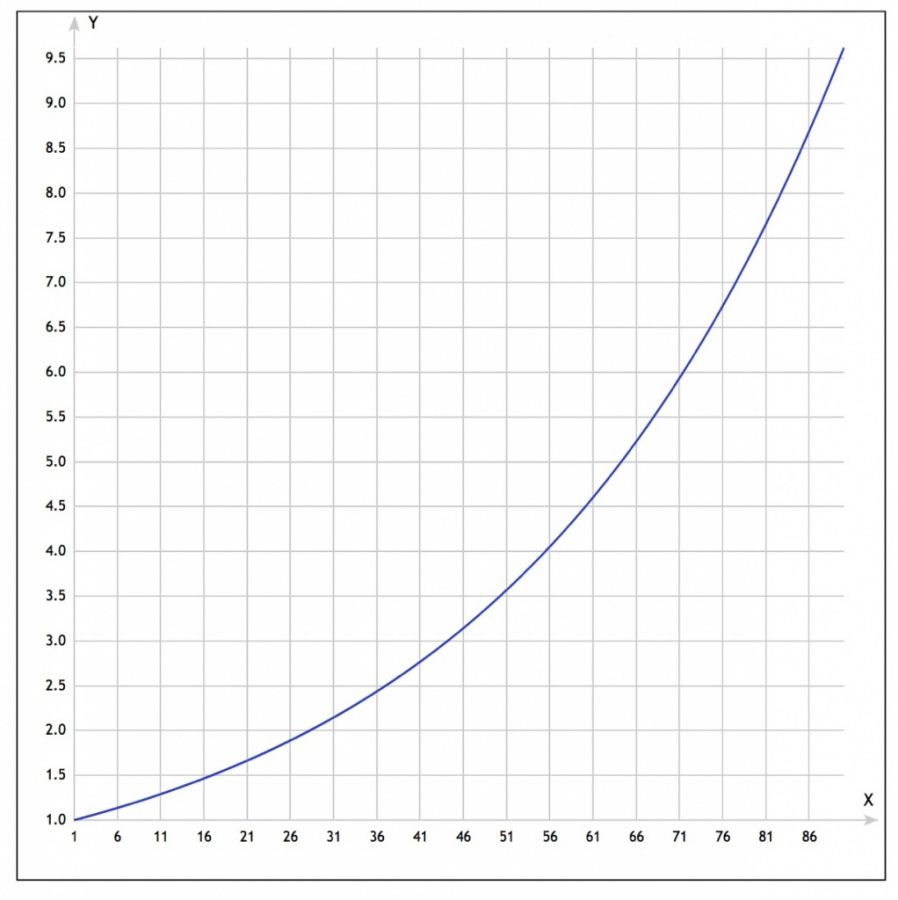 It is clear that as the amount is growing, so is the price that at some point is approaching the 10 RVN cap, which is now converted into USD would equal to about $10. The founders probably foresaw that, having made the price fixed at 10 RVN upon reaching the amount of 90 reviews per user. It appears that the RVN issue amount is unlimited and will be operating in auto-mode: give 1R, get 1RVN fresh out of the oven. A major takeaway from this model: there is a pretty obvious connection between the token price and the popularity of the platform. The more popularity the system grows, the more reviews will be generated. The more companies and users start to participate in the process, the more RVNs companies would need to pay for reviews. A growing volume of reviews will cause the increase of the price per review. Hence, the companies will be needing more Rs to buy RVNs to make payments to the users, which is enhanced by an auto-mechanism of constant exchange of external tokens to internal — and vice versa — thus, bringing a constant new user flow. The system is also self-balanced: the faster Rs exchange rate grows, the less Rs amount users will be getting when exchanging RVNs — and the more Rs are held by the company. That’s how the deficit at the market and the increase in token price as a consequence are achieved.

Are you disillusioned by the fact that economic value is floating further away from a classical concept of delivering a strong product? It’s not about the production anymore: the blockchain economy is bringing a way more creative (apart from speculative) way to attach the value. Might sound like an audacious idea, but what if the token is not a panacea to the challenges of digital shared economy and soon we will be seeing more new economic tools? Well, that is yet to be seen.