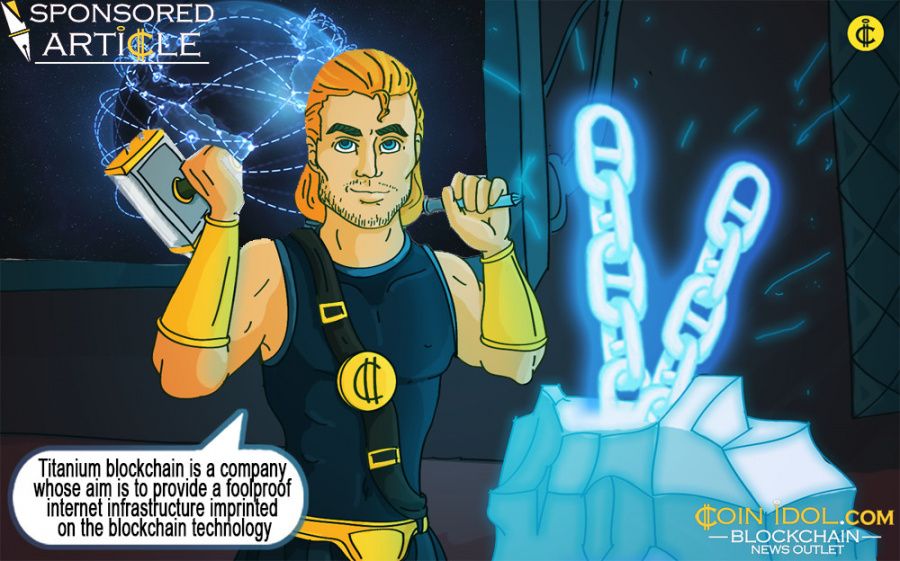 Titanium blockchain is an innovative company whose aim is to provide a foolproof internet infrastructure imprinted on the blockchain technology. Unlike traditional services where a company’s servers reside on several mutable devices, on this platform, IT services are decentralized on the Ethereum blockchain.  All this comes at a reduced cost.

Besides impenetrable security, having servers on the blockchain technology translates to zero outage time. Also when one device fails, the load is quickly transferred to other active nodes and work proceeds without hiccups or unnecessary hiatus. Traditionally, when the main server is hit, the rest either go offline or operate at a reduced speed. With blockchains Immutable and flawless nature, you can’t face such challenges.

TitaniumBlockchain does not serve franchises of a certain caliber; it fuels everything from nascent ventures to established organizations like Microsoft, I&M, PayPal and many more. Any company with an IT faculty and wishes to virtualize its equipment stands to gain a lot in terms of efficiency, affordability and improved monitoring.

In an effort to provide a holistic network infrastructure, Titanium blockchain has designed a framework with a myriad of services to cater to the needs of every business. The main ones include:

Without a doubt, the cryptocurrency craze is getting almost everyone onboard either for investment purpose or purely for fun. Either way, most virtual currencies, albeit being backed up by blockchain, are still centralized. Via DEXchange, individuals will be able to trade the top fiat currencies with the top 200 cryptocurrencies with complete anonymity and zero control from regulatory agencies. Additionally, the transaction charges will be kept at lower levels.

Infrastructure as a Service

When it comes to IaaS, Titanium blockchain aims at providing the internet that is fast, efficient and decentralized. Through IaaS, one will be able to access everything on a tablet or even a smartphone without the fear of hackers getting in the way-thanks to the immutable nature of the Ethereum blockchain.

IaaS will cut down the costs involved in setting up an IT firm. There will be no need for extensive labor, machines and anything related to load balancing. The nodes will be fashioned in such a way that when one fails, the load moves on to the working computer.

Those who have started a venture before know how hard it can be to get everything ready for a token liftoff. If you have a successful technical idea but need some help with marketing and organization to bring the idea to life, Instant ICO Incubator III can back you up by providing end-end token launch services. Additionally, they will accredit your venture (considering they are likely to become an authority in this niche) and further virtualize all the mining equipment.

Bring Your Own Cloud

Within the TBIS infrastructure, there is also an entire gamut of services that aim at revolutionizing the computing world. Through BYOC, individuals will be able to create their own private computing environment once they have contributed hash power to the network. BYOC service is beneficial to cryptocurrency miners, file servers, web servers amongst other things.

Have you ever bought stuff via PayPal or any other conventional payment methods and never received your goods. Worst still, have you ever experienced funds reversals? These are some of the problems cryptocurrencies and the blockchain technology aims at fixing.

If you buy or sell a product from someone via TBIS’ Cryptoescrow service, a smart contract will be initiated, and funds will only be released once the client on the other end provides a unique address that corroborates the one on the smart contract. In short, the smart contract has two parts (one for the buyer and the other for the seller) that must match for the transaction to be approved. Transactions on blockchain can never be recalled.

Sure, Amazon Web Services, Microsoft Azure, and Rackspace have done a commendable job in providing the internet infrastructure. Nevertheless, their lack of blockchain feature makes them insecure and thus rife with loopholes that encourage hackers and other online scams. Without decentralization, all our browsing habits are also monitored for the interest of a few organizations. Titanium blockchain will mark the end of data sniffing.

Blockchain technology may be commonplace with many people, but there is a larger lot out there who are not familiar with it. But by being BBB certified, TBIS lives to achieve its commitment through credible means. Some of the core principles of Better Business Bureau that this company upholds include honest advertising, trust building, transparency, safeguarding privacy and embodying integrity.

TBIS is the brainchild of Michael Stollaire and a few other distinguished infrastructure management experts. This is not Mr. Stollaire’s first work. EHI, a successful network infrastructure management consultancy firm was also founded by him. The company currently offers its services to global corporations like PayPal, Microsoft, IBM, Walt Disney Studios, Apple, Boeing, and Accenture. What does this mean for TBIS? It means this platform is not an only child. It already has EHI as the ground to stand on.

Since all those major corporations believe in EHI and its founders, they won’t have a problem giving Titanium Blockchain a chance. And if all goes well, this platform will join a few others in revolutionizing today’s network infrastructure landscape. The ICO is available for those interested in backing this support-worthy technology.

Does TBIS have future goals?

Sure, it does. As said before, TBIS founding team is made up of the best talents. They have experienced business individuals and technical experts in the blockchain technology, network administration, business management, systems engineering, business marketing and Smart Contracts. They will make sure TBIS users are safe and don’t loss high-value assets through things such rogue contracts.

We all know that most developers resort to the controversial “hard fork” to find solutions to problems on their platforms. TBIS will use safe methods to ensure their services transition with the ever-changing technology so they remain to be the most reliable and trustworthy provider of smart contracts.

Tags
Blockchain Titanium Service Technology Companies Platform Internet Ethereum Decentralization
Most Popular
Jan 20, 2021 at 15:03
News
Cryptocurrency Campaigning is Going Mainstream: How Politicians Use Bitcoin to Win Support
Jan 20, 2021 at 14:02
News
Bitcoin Cash Correcting Lower, May Slide to $430 Low
Jan 20, 2021 at 13:10
PR
Get up to 7BTC Deposit Bonus and Bet on Sports, Casino Games, Slots and Politics with 1xBit
Jan 20, 2021 at 12:36
News
Bitcoin Stuck Below $38,000 as Buyers and Sellers Enter Period of Indecision
Jan 20, 2021 at 09:12
News
Soteria Has Started Insurance Function on Pancake on 19th, with Coming IFO on the 21st
More