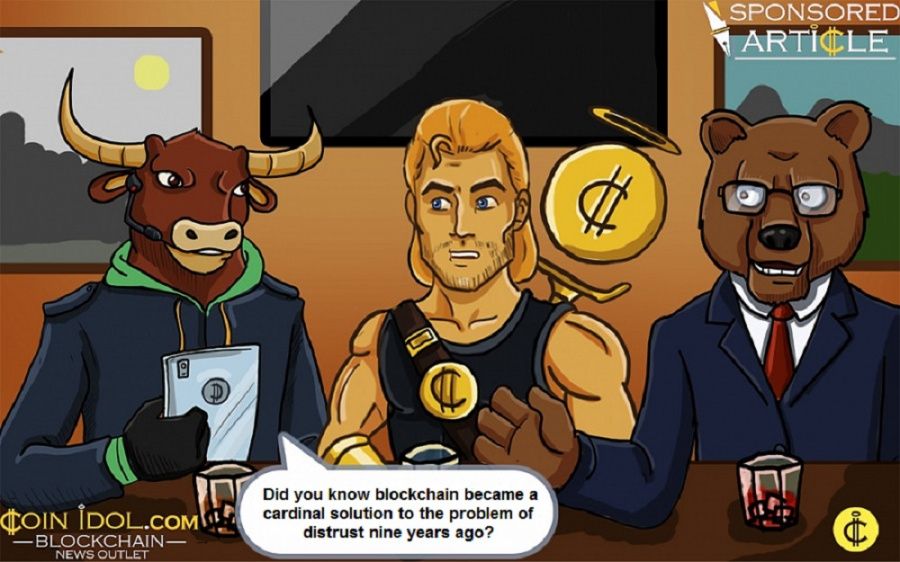 The problem of lack of trust between the market participants, described below in this article, is not a new one. However, at present time, because of certain reasons, it became especially urgent, as well as the demand for its solution.

It is not even really a problem; it is just a peculiarity of our time: we already do not need to be personally acquainted with somebody to communicate with this person for years, including on business issues. In our century, when use nicknames, abbreviations or rows of figures to designate ourselves, the issue of confidence becomes especially thorny.

In many advanced systems of Internet trade, for instance, with the giant AliExpress, the question of confidence was solved by adding an escrow service to the sale system. Escrow plays a role of a buffer, defending the buyer from receiving a product falling short of the description or not receiving it at all. The mechanism of the escrow service is very simple: the payment for the product or service will only be received when a third party playing the role of the middleman will confirm that the terms of transaction have been fulfilled. After this confirmation, the funds, deposited on a neutral account, are transferred to the account of the responsible party. Everybody is happy and ready to continue cooperation.

However, even this mechanism has its shortcomings. For instance, the closing date of the command is often forgotten, and it is not uncommon for the vendor to receive the payment when the product has not yet arrived: those who wait for your command for more than one month can easily miss the closing date.

In finding a cardinal solution for the problem of distrust, a great step forward was made nine years ago, with the emergence of the blockchain technology. One of the fundamental properties of the said technology is a possibility of business relations between parties beyond the presence of the factor of trust. The blockchain plays the role of middleman between the parties: everything that has ever been written in blockchain stays there forever. What is more, any counterfeiting or tampering with the information recorded in the blockchain are impossible because of its very design. Moreover, the technology brought to the blockchain market by the team led by Vitalik Buterin complemented this property of the blockchain by a simple yet brilliant tool, the smart contract, a programmed and dispassionate self-implementing decision, thanks to which the Ethereum can be said to have conquered the whole world in no time.

The popularity of Ethereum is mainly and largely explained by revolutionary innovations offered by this platform: it made possible a completely different business structure. Similar to Internet, once a platform for hundreds and thousands of innovative ideas, Ethereum was chosen by those who needed space for the development of their business. This is the factor behind the incredible growth of the ether, the Ethereum coin.

It sounds as a fragment from a fantastic novel but in the beginning of this year the ether was worth less than 9 dollars while currently its price fluctuates in the vicinity of three hundred dollars. And this is not yet the highest result in 2018, while during the first five months of 2017 the ether grew 2839%. The main factor behind this phenomenon was a new capital raising mechanism – the initial coin offering, or ICO – that spread everywhere with lightning speed.

We will not enumerate the pros and cons of this method of raising capital – the topic is very vast. We will only say that never before have the science, the technology and the capital come as close to each other as in this unique space. The ICO made possible the advancement of such projects that would probably have absolutely no chance in the past, due to the combination of such adverse factors as the absence of the capital base, geographical situation and others. However, the ICO gave them a new chance, and it is quite probable that among the projects launched this year there are new Google and Facebook.

However, it is precisely because of the simplicity and of the very possibility to collect millions that there is a bomb that many fear could explode and bury not just scam projects but a great part of the young and growing blockchain market.

There are scammers. They have always been and they will always be, it is a fact. And such great opportunities cannot escape their attention. However, the ways of fighting the potential ICO scamming chosen by a number of countries are distressing and counter-progressive. To solve this problem by banning ICOs is like healing inflammation by chopping off limbs.

The future, as always, belongs to the median way. The ICO market as we can see it now really contains a ticking bomb waiting to explode. However, it is already impossible to ban this phenomenon into non-existence: this way of investment is too handy for everyone. It means we should invent something new, something that would stop market from completely turning into a Wild West; something that would, on the contrary, regulate it, driving away those who love easy profits and do not saddle themselves with fulfilling their obligations to others.

By the way, we are speaking not only about fraudsters and scammers. Not all people, for instance, are able to adequately assess their capabilities, and some products for which the funding is being collected are yet impossible to make in current space- and timeframe simply due to lack of technology, and it is often openly stated. How can an investor understand who is he facing? Is this person the creator of a new Facebook, a scammer and a rogue or a delusioned dreamer? Hard to tell them apart: the ICO serves exactly to collect funding for fantastically bold, daring, innovative projects, this is the main feature of the ICO. And here we come to an elegant solution that is proposed today to solve the issue.

The solution we are speaking about combines all three aforementioned technologies that are used to solve the urgent problem of lack of trust in transactions: escrow, blockchain and smart contract.

DES is a decentralized platform based on blockchain technology, built on Ethereum smart contracts, a starting platform for the launch of the ICO that enables its users to control the spending of collected funds with the help of the blockchain transparency, delayed gratification of the escrow and the voting mechanism.

The idea on which DES is based aims to minimize the investment risks, connected with ICO, to improve the general reputation of this innovative method of fundraising and to reduce the expenses of the participants of the investment process.

However, DES is not just a platform to conduct an ICO. To be more exact, it does not limit itself to this function. The possibilities of the platform are far more extensive. The DES infrastructure is applicable to all the fields in the blockchain sphere where the mutual trust between parties plays an important role.

The work with the ICO is organized in a following way. The startup that attracts investments with the help of this mechanism is integrated with the DES platform. After testing and approving the startup, DES consults the roadmap of the project to retrieve following parametres: completion schedule, plan of work with deadline, size of necessary tranche of funding. As the plan is implemented, the information about the volume of work done as recorded in the checklist. If the information is approved by the majority, the next tranche can be approved. Thus, on every stage of the project there is a detailed checkout of the real work done by the team and its conformity to the initial promises.

To prove the viability of the idea on which the platform is built, DES plans to conduct its own ICO in the same way.

“We are a part of the common market and we obey its laws, that is why we will use our own ICO campaign to demonstrate how our escrow platform would work. Such an experience would allow us to make sure that the market is ready to grasp our idea. Voting “for” DES, the participants will be able to assist the development of the solution that would make the market a safer, a better and a more honest place”, says the white book of the project.

Recently, DES has finished a pre-ICO stage, attracting 958 ethers from more than 50 investors. It means the community trusts the project, its aims and ideas. The next stage will be the ICO itself: it will last from 22 November to 20 December. The total number of issued tokens will be limited by the number of coins sold during the ICO: all non-sold tokens will be destroyed.