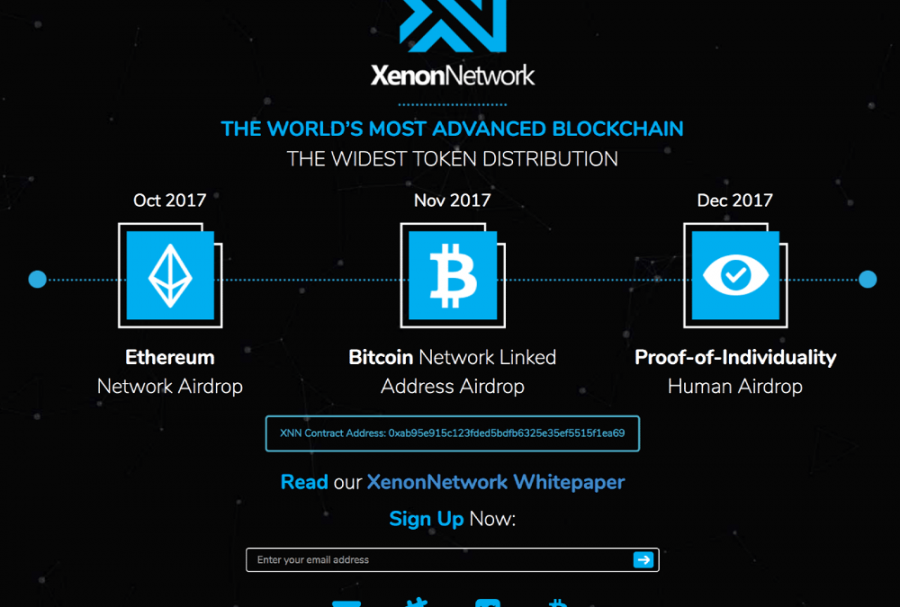 Enterprise blockchain platform, Xenon announces the launch if its token distribution campaign as it gears for July 2018 release.

October 2, 2017, Auckland, New Zealand – XenonNetwork, an enterprise-scale blockchain launching in July 2018 begins a massive distribution of their native Xenon (XNN) ERC-20 compatible tokens to over 400,000 active Ethereum addresses at the beginning of October. In addition to this, a similar distribution to bitcoin holders will occur in November, followed by a proof-of-individuality public token distribution from November through June 2018.

“The EOS project engages a proven team developing the world’s most innovative and high-throughput enterprise blockchain. However, recent regulatory issues surrounding initial coin offerings in China and the United States, as well as limitations of the crowd-sale distribution model may create potential hurdles for adoption of the project. We present a massively distributed alternative implementation of the EOS project which avoids these limitations.”

The organization proposes to distribute the Xenon tokens as follows:

— 30 percent of Xenon tokens will be distributed to Ethereum addresses containing more than or equal to 0.1 ether in early October.

— 20 percent of Xenon tokens will be distributed to bitcoin holders based on proof-of-holdings in November.

— A further 20 percent of Xenon tokens will be distributed using proof-of-individuality mechanisms to encourage widespread circulation of the tokens.

In July 2018, these ERC-20 tokens will be redeemable for native tokens on the newly launched blockchain.

“We believe that distribution and adoption are the most important factors determining the success of a blockchain project. We are determined to have this token in the hands of as many people as possible at the launch of the blockchain in 2018.”

Disclaimer: This press release contains forward-looking statements, strategies, and plans which are speculative and may not eventuate. XenonNetwork has no relationship to EOS.io, block.one, or the founders of the EOS project, other than our stated intention of adopting the EOS MIT licensed open source software.

Xenon is the source of this content. This press release is for informational purposes only and should not be viewed as an endorsement by CoinIdol. We take no responsibility and give no guarantees, warranties or representations, implied or otherwise, for the content or accuracy.  Readers should do their own research before investing funds in any company.