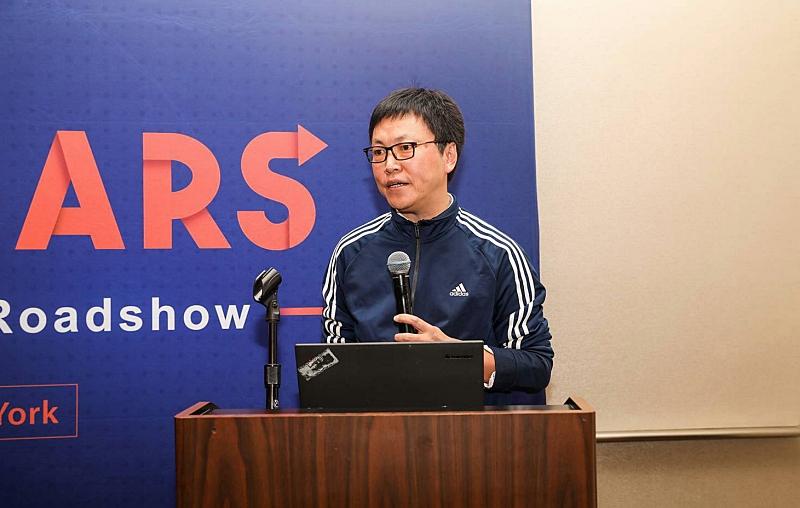 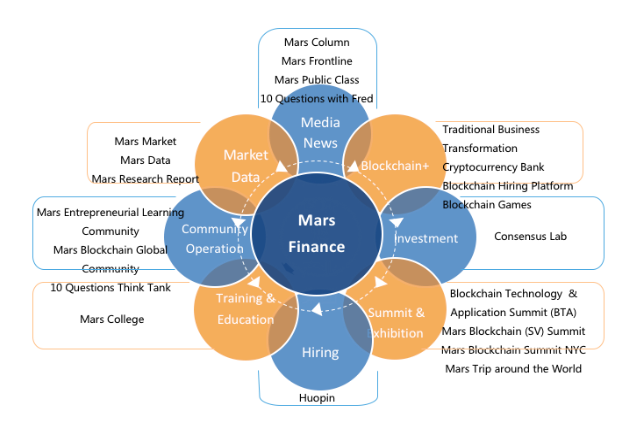 1. News and Media. Mars Finance provide exclusive news and first hand blockchain industry updates, along with data collecting technology and personalized recommendation engine to provide users a 24/7 unstopped briefs and news on blockchain. Currently, total of 12000 news and 26000 briefs have been published. Both Chinese and English versions are available for a wider scope of users, and the Japanese and Korean versions will also be available soon.

Media segment include content products such as Mars Column, Mars Public Class and 10 Questions with Fred and etc. Mars Column, as an integration platform for blockchain media and “self-media”, has over 800 columns covering a range of 62 institutions, 715 media, and 53 projects for a total published articles over 6580.  10 Questions with Fred is one of the most popular high end blockchain interview programs in China. Up till October 2018, total of twenty five thought leaders and industry front runners have been interviewed. Mars Public Class is one of the largest blockchain knowledge-sharing platforms in China. Top tier entrepreneurs, investment institutions, well-known scholars and leading blockchain professionals have been invited to share through communities and to generate discussions on the newest technology, application, development trend and investment direction. Over 200 sharing sessions have been completed as of now.

4. Training and Education. Mars College joined by the best mentors from top academic, industrial and investment institutions, to provide training and incubation services for blockchain professionals, elite entrepreneurs and investors. With the intention to create the “YC entrepreneurial training camp” in blockchain, Mars College also offers comprehensive services include channeling in funding and other resources. Three sessions of the first semester have been completed so far, while a dozen offline events have been successfully hosted in Beijing, Shanghai and Shenzhen.  Study tour to Japan is next in the agenda.

5. Hiring and Recruitment. Mars Finance invested in Huopin, a top blockchain recruitment platform, strategically in October. As of now, over 1,000 global well-known blockchain companies, 300 colleges and universities, and 50,000 blockchain professionals are registered on the platform. Huopin is proactively expanding globally, as it has successfully landed in Korea and Taiwan.

6. Summit and Exhibition. Mars co-hosted the 2018 Blockchain Technology and Application Summit (BTA) with CSDN in March. It became one of the most influential and covered the most technical audience blockchain summits in China. Mars hosted “Mars Blockchain (Silicon Valley) Summit and First Global Blockchain Leaders Dialogues” in August 2018.  And again, Mars Blockchain Summit NYC was successfully held on October 18th. Mars Trip around the World started from China and setting foot in the global market by organizing offline events to promote blockchain technology and disseminate information. So far, eight summits in Beijing, Shanghai, Shenzhen, and hundreds of offline technology and information sharing seminars covering more than 3000 attendees and 800,000 people by content have been organized.

8. Blockchain+. Blockchain+ helps traditional businesses to combine their business with blockchain technology, in turn, to promote blockchain technology application in traditional businesses’ transformation. Blockchain+ intent to penetrate industrial-chain’s upstream and downstream resources and to assist the development of blockchain projects such as digital currency banking and blockchain games. The founder of Mars Finance, Fred Wang says that after eight months of rapid development, Mars Finance has become a leading blockchain media service platform in China. These eight core businesses mark the first step of building a Mars ecosystem and promoting Blockchain’s positive development in China and in the world. In addition, during the closed-door Mars Finance Development Strategy Session, Mars announced joint incubation of CoinBank with Tai Lab (Silicon Valley) and global strategic partnership with BitUniverse.