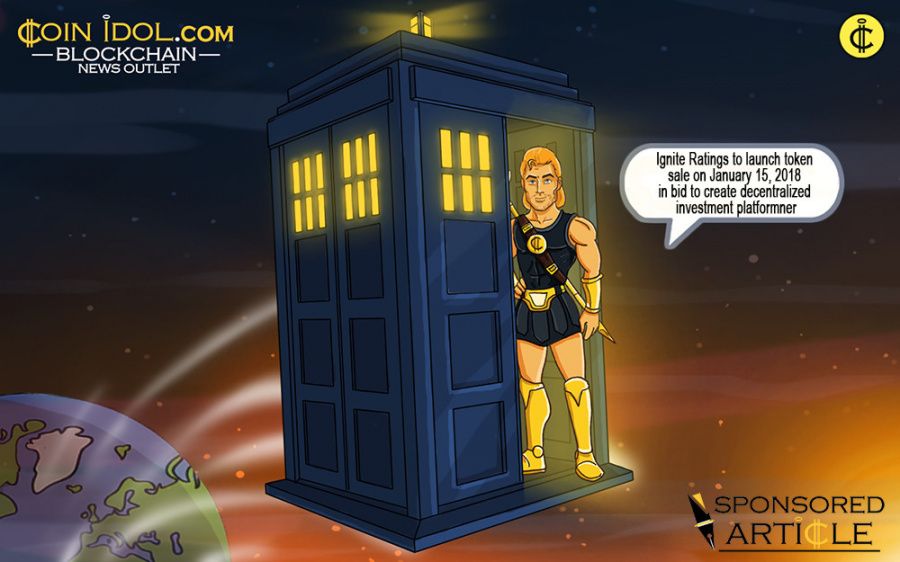 Spanish blockchain firm Ignite Ratings (Ignite) is pushing forward with the development of the world’s first investment platform operating in a fully decentralized and self-regulating manner.

Powered by the wisdom of crowds, the breakthrough platform hopes to create an industry disruption, revolutionizing the way token generation events and digital assets are analyzed and traded. In an innovative approach, a decentralized intelligence platform will combine with an investment index managed through the ratings platform itself.

Ahead of the development and release of its platform, Ignite has announced details of a crowdfunding campaign, whereby participants can purchase its tokens. Once functional, Ignite’s software will automate investments by deploying the index’s capital to the best-rated assets, after which half of all profits generated by the index will be distributed back to qualifying token holders.

Because issuers of capital venture traditionally incentivize ratings agencies, a clear conflict of interest arises, resulting in bias that is difficult to identify. Because ratings are also not based on real-time information, the information received by traders and investors are limited in value.

Ignite’s rating solution, on the other hand, sees users deploying capital in the form of contributions made during the token generation event. This simple directness is the incentive: token holders are motivated to rate assets appropriately since funds are invested automatically into the platform’s highest-rated projects.

Resembling interfaces that will be familiar to users of other rating or review services, such as Yelp or TripAdvisor, token holders will be able to plug right into the Ignite platform, providing feedback and analyses on blockchain-based assets. This community of opinion-givers are referred to collectively as the HIVE, recognizing that all users collaboratively combine unique skills, opinions and methods to generate a collective ratings score.

The anonymity of token holders possibly allowing for collusion is a concern addressed by Ignite’s proprietary “Reputation Engine,” which manages member interactions with the platform . All interactions are subject to rating and review by peers, resulting in reputation scores. The higher the reputation, the more impact members have on the rating process, while the opposite is true for low-reputation members.

This concept of community self-moderation creates a collusion-resistant model. Furthermore, all interactions are permanently recorded on blockchain, resulting in a fully transparent view of all user activity with a verifiable audit trail for all trades and assets.

Ignite co-founder Christopher Cousins believes that the thought process behind investment and trading decisions provides for a great learning opportunity:

“If a user is capable of making an investment then they ought to be able to explain the reasons why they feel it will be a successful investment. I imagine we will have very interesting viewpoints from a wide demographic, with a variety of backgrounds and skill sets”.

United in a common goal of profitability, community members align their interests to ensure individuals rate appropriately and honestly. This is the embodiment of a decentralized ratings system that should, in theory, provide superior returns and real-time rating information for the industry.

As all assets can be liquidated or purchased instantly based on the HIVE’s collective decision, Ignite’s members are motivated to revisit their ratings and updating them to maintain relevance. Tokens themselves represent a great diversification tool, since the Ignite Index will only invest a maximum of 1% of its current net asset value into any single asset. This means that token holders will gain maximum exposure to the most valuable ventures.

The Ignite solution has already received significant seed funding in the form of more than 4,000 ETH raised from a number of high-profile investors.

Its parnerships with Overstock’s T-Zero and SpeedRoute also gives it access to sophisticated trading technology.

To secure further resources needed for the ongoing development and launch of its platform, Ignite will hold a crowd sale, beginning with a pre-sale from December 15th to 22nd, 2017. A public general sale will take place the following month, from January 15th to February 29th, 2018.

For more information on the project and crowd sale, visit the Ignite Ratings website and read its whitepaper.