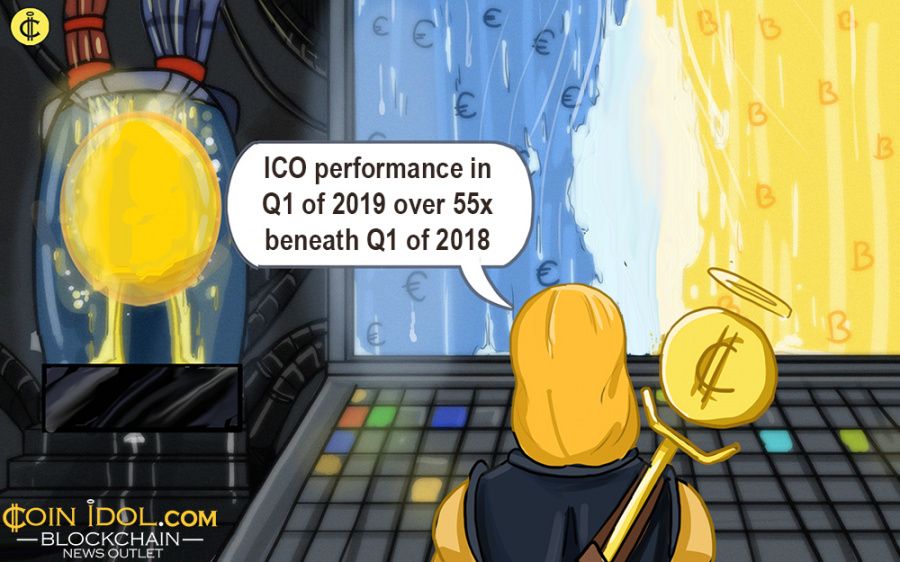 The performance of initial coin offerings in the first quarter (Q1) of 2019 was worse compared to previous years. The total amount of ICOs and the number of investments indicate that around 381 token sales were completed in the fourth quarter (Q4) of last year and just 108 projects revealed amount on engrossed investments.

The Q1 of this year only saw 279 ICOs completing their tokensales, and 58 of them revealed data of attracted and engrossed investments.

As you can see, there is a decrease and downhill movement in investments. ICOs engrossed around $284 million in Q1 of this very year as compared to $1.6 billion in Q4 of 2018 – registering a loss of over $1.315 billion.

To simplify this, the ICO projects this time have engrossed almost 5.65 times less money compared to the preceding quarter (Q4 of 2018), as seen in the full list below.

“We believe 2019 is a year of repair, setting up for a strong recovery in crypto prices broadly in 2020. Any improvements in supply/demand dynamics are positive for prices and hence, the slowdown in ICO funding is a net positive. The sentiment is also quite muted, which is positive,” a giant crypto advocate Tom Lee said.

Bear Market Could Be Behind This Poor Performance of ICOs

Furthermore, according to a report by the Wall Street Journal (WSJ), around $118 million has been attracted through ICOs in the Q1 of 2019, more than 58 times less than the $6.9 billion that was attracted during Q1 of 2018.

The report refer to the data presented by ICO analytics website TokenData. The WSJ claims that several investors were scared off by regulators’ actions including the U.S. Securities and Exchanges Commission (SEC), against non-acquiescent ICOs, in addition to the general protracted bear market.

In February, the SEC charged cryptocurrency company Gladius Network with selling illegal (unregistered) securities after the firm self-testified to the commission.

In March, co-founder of Future Perfect Ventures, Jalak Jobanputra, revealed that venture capital valuations have been intensely shaken by the crypto bear market.