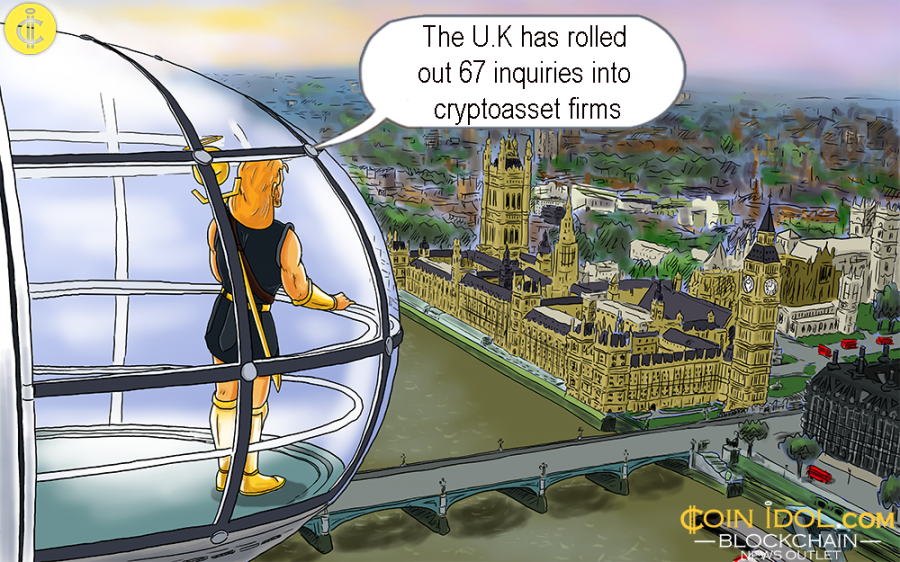 The U.K disclosed that it has rolled out a total of 67 different inquiries into cryptoasset firms, out of which 49 were successfully closed and 18 are still ongoing. To boot, the U.K government has ratified that it is poised for action to offer more aid to the Financial Conduct Authority (FCA) to assist regulate the cryptocurrency sector.

The U.K has been severely repressing the cryptoasset firms which have been stepping out of line for some months and, towards the end of 2018, it released a summary of all the progress it has so far achieved, according to a Medium report.

According to the Telegraph report, the FCA uncovered the information while responding to a Freedom of Information (FoI) request. The report hints that the authorities, as of Mon Nov 12, 2018, officially opened the inquiries into 67 companies that were allegedly involved in the cryptoasset business.

“The Financial Conduct Authority on Sunday confirmed that it was investigating 18 businesses involved in the sale of cryptocurrencies such as Bitcoin. The regulator also issued alerts and warnings about dozens of companies suspected of cryptocurrency scams,” Financial Times reported.

The FCA closed 49 investigations out of 67 and went ahead to issue consumer alerts for 39 companies. An alert is normally issued by a regulator after suspecting that the company in question is involved in as cozenage and is operating sans authorization. The rest 10 inquiries were closed for various reasons such as lack of evidence against the companies. Nevertheless, the FCA has declined to name the firms in question as investigations are currently happening.

Today, the situation of cryptoasset regulation is more or less difficult and complicated in the UK, since there is no document outlining the rules to regulate cryptoasset, but firms selling cryptos still need an anterior approval from the FCA. Albeit, the terms have been slackly defined and are now open to misunderstanding.

The FCA came out to express its interest of prohibiting the sale of cryptoasset derivatives in October last year after the Treasury Committee officially published a report in September. The report was saying that “Wild West cryptos should be regulated.” At that time, the government was planning to give FCA the authority to superintend the cryptoasset industry.

However, since the U.K government is taking a sceptical position against this nascent sector, it’s open to speculation and conjecture as to where the state of affairs goes from here. But experts are advising U.K citizens not to stay optimistic, as of now, about generating massive profits from this kind of business.