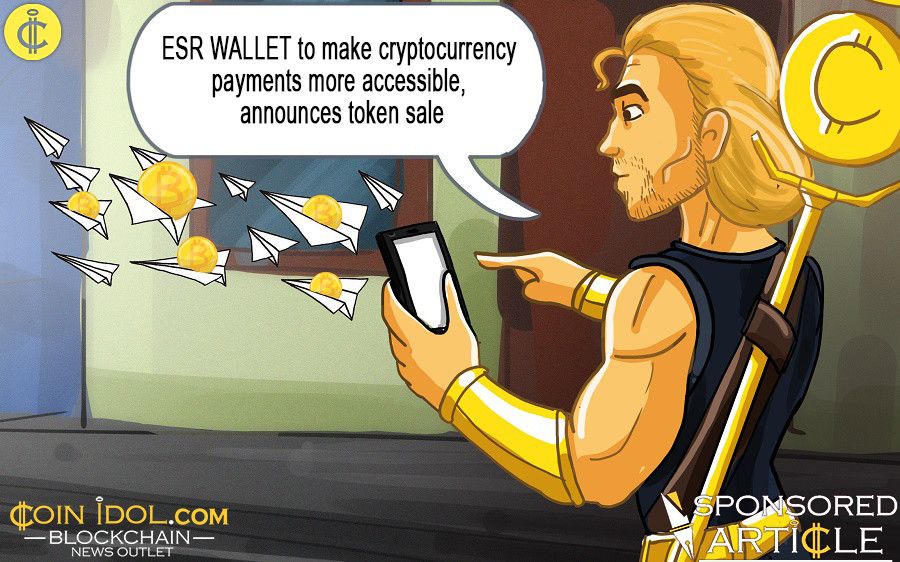 Tech startup ESR Wallet has introduced a universal wallet with a full range of banking services, along with 20% per annum on cryptocurrency deposits, as well as revealing details of their token sale, which began December 18th.

The ESR Wallet is a digital currency wallet that supports blockchain assets and offers a full range of banking services. In October, The ESR team Carried out a pre-sale that successfully raised more than 1 million UAE.

“We are sure that it will be much easier to reach the sale goal of $8M, as long as we show our investors the huge scale of our work and all the problems that we have solved during last 2 months.”
“The price and liquidity of the Token after the sale is what most investors are interested in. In addition to the distribution of 30 percent of the company's profits to all Token holders, the ESR Token will be used inside the ESR Wallet system to pay commissions. Thus, the use of our Wallet without ESR Tokens will be impossible. Considering that we have collected more than 15,000 pre-orders for ESR cards, our investors do not have to worry about the demand for Tokens on the exchanges after the token sale.”

Although some like-minded companies already exist in the market, none have progressed as far as ESR Wallet. TenX and Monaco have raised a combined more than $150 million between them, but have not yet seen out their roadmaps in the months following their crowdsales.

In contrast the ESR Wallet team is working hard to see out all major aspects of their projects foundation development before their token sale commences.

The ESR team have been completing the basic functionality of their platform. KYC and AML will be implemented soon, and the ESR currency converter is nearly completed. Users will be able to use USD, EUR, BTC, BCH, DASH, ETH and ESR to fund their accounts.

ESR tokens start at $7.50 each, and are set to increase to $10 following the release of the first ESR plastic card. The ESR token is released under the e-Token contract. The number of tokens is limited to 10,000,0000. After the ICO, all unsold tokens will be burnt.

The ESR wallet token sale has been implemented strategically for the technical re -engineering of the ESR wallet payment and credit service and a marketing campaign to promote the company. The ESR token is ESR Wallet’s shared smart contract.

The holder of the token is entitled to a share in the profit of the ESR wallet Payment service. The share of 30% of profits is distributed to all issued tokens, at the end of each quarter, 30% of the ESR wallet’s payments and credit service profits are transferred to specialized wallets, after which BTC, BCH, ETH, ZEC, DASH, LTC will be distributed among token holders in accordance to the smart contract.

The profit received in currencies USD and EUR will be converted at the ESR Wallet exchange rate on the day of dividend calculations in ETH and transferred to the appropriate wallet.

Tags
Wallet Token Sale Cryptocurrency Payment Service Banking Startup
Most Popular
Sep 14, 2022 at 11:37
Price
Bitcoin Cash Faces Strong Rejection at $138 as It Continues Its Downward Correction
Sep 14, 2022 at 10:30
Price
Weekly Cryptocurrency Market Analysis: Altcoins Continue Their Upward Moves as Buyers Attempt to Sustain Such Rallies
Sep 14, 2022 at 09:29
Price
Cardano Slumps as It Faces Selling Pressure at $0.52
Sep 13, 2022 at 11:30
Price
Ripple Continues Its Sideways Trend and is Under Selling Pressure at $0.36
Sep 13, 2022 at 10:30
Price
Litecoin is Stable but Remains Stuck Under $64 Overhead Resistance
More