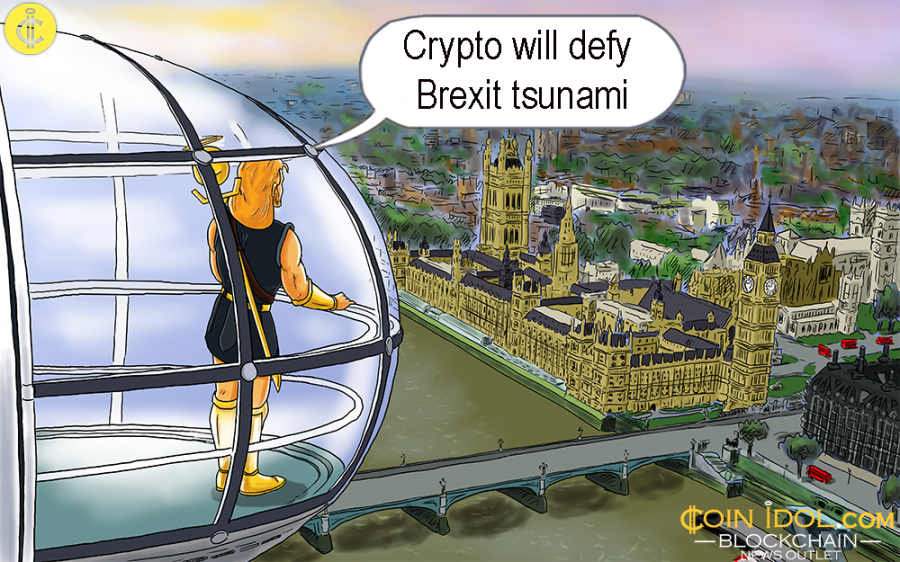 In August 2018, Chancellor Philip Hammond predicted hefty economic injury from crashing out of the EU without a deal, warning of an 87.7% punch to GDP and a £80 billion void in public finances.

The Bank of England (BoE) has shown a fretting picture, cutting its GDP prediction for next year to 1.7% from 1.8%.
Crypto markets are popularly known for their wild volatility in price and value, and that has grown as Britain struggles to effectively secure a Brexit deal with Brussels.

The globe's biggest and most famous digital currency had benefited from a somewhat resurgence, having dropped 9.2% and 5.8% in August and September in a relative manner.

BTC also celebrated 10 years on the digital currency markets, but the ending price at the close of October hit a big decline from the giddy heights reached in December 2017, when it increased to almost £15,700.

But digital currency experts are optimistic that the crypto market can use the chance of Brexit as investors devouring over the physical economy will utilize it a lot to protect their assets and increase their wealth.

Chief Executive of Digital Securities Exchange (DSX), Mike Romanov, revealed Britain unconstraining itself from the European Union’s tough rules could help it to adopt its own rules to take it forward to potential investors. He said:

“Britain is already looking at how it can maintain its dominance in financial services post Brexit, even as some major players abandon ship ahead of March next year.”

The Chief commercial officer at Cryptology, Herbert Sim, revealed that it's difficult to think the UK won't take advantage of Brexit to open up to digital currencies.

He says exiting the EU will unconstrain the UK from "red tape processes," that have a harmful impact on the boom of digital currencies and could in the near future trump its allies across Europe by manipulating blockchain partnerships with several nations across the globe. Mr Sim said:

“Leaving the EU will give the UK decision-making capabilities on areas that the EU’s bureaucratic processes can be desperately slow to decide on.”

The MD of eToro, Iqbal Gandham, believes any volatility from Brexit will only be temporary. He revealed:

“We are already seeing crypto assets used as an alternative in less stable economies, and Brexit could spark a new wave of investment from people looking to diversify their portfolios and hedge against geopolitical risk.”