Bitcoin.com Celebrates 2 Million Wallets Created in Less Than a Year 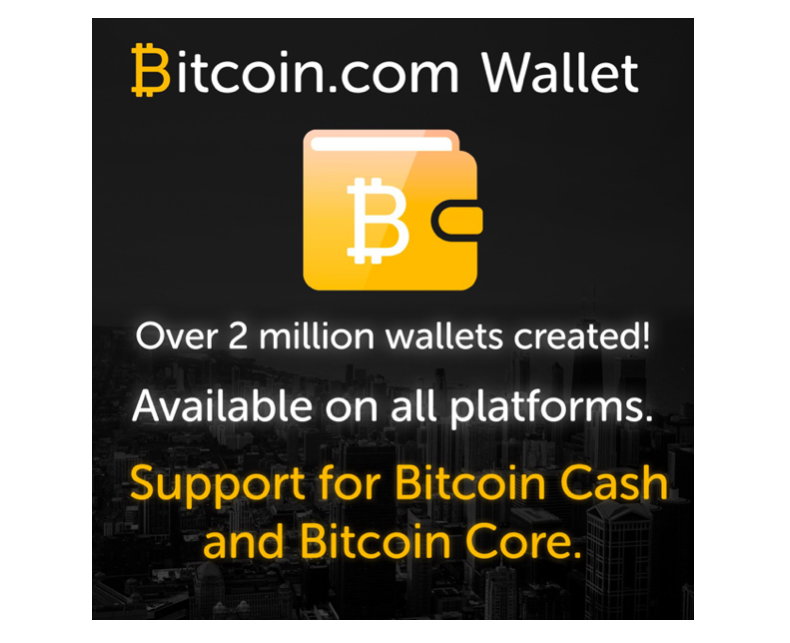 The Bitcoin.com Wallet announces two million wallets have been created since its release just seven months ago. The non-custodial wallet allows users to send and receive both Bitcoin Cash (BCH) and Bitcoin Core (BTC). The developers have big plans for the Bitcoin.com Wallet as more features are coming to the platform in the future.

March 2018, St Kitts – The  Bitcoin.com Wallet reached a milestone of over two million wallets created this week. Bitcoin interest and demand has spurred thousands of downloads each and every week since the wallet was introduced back in August of 2017. The multi-currency wallet that holds BCH and BTC is available for download on mobile or desktop from every major platform and operating system including Windows, Mac, Linux, Android, and iOS. The wallet allows users to store their private keys themselves. The funds are not held by a third party or by Bitcoin.com. Also, recently the wallet has added a few additions to the client’s interface making the user experience more enjoyable. For instance, the  Bitcoin.com Wallet is one of seven wallet providers that offers  Bitpay’s Payment Protocol compatibility. This makes paying Bitpay invoices with the Bitcoin.com Wallet simple and easy. Moreover, the wallet now offers  ShapeShift abilities by utilizing the company Shapeshift’s API.

This means users can swap BTC for BCH or vice versa natively—within the wallet’s interface. The platform also allows for multi-signature wallets where spending control can be split between more than one device/user for added security.

Bitcoin.com’s owner and CEO Roger Ver is excited about the future of his company’s flagship product. Ver states during the announcement;

“Usage of our wallet has doubled in less than three months as demand for Bitcoin Cash continues to grow worldwide.  With this, we are seeing an increase in industry support as well as merchant adoption on websites and retail venues. We are working hard to consistently roll out new features and improvements that add to the user experience of the Bitcoin.com Wallet and improve the Bitcoin ecosystem as much as we can.”

The open source  Bitcoin.com Wallet has many new features coming in the near future. In time, there will be the potential for debit-card top offs using the platform. Bitcoin.com developers are also researching BCH-chain colored coin management. The Bitcoin Cash network may soon have the ability to create token based assets (colored coins), and Bitcoin.com wants to remain at the forefront of such technological advances.

Check out all the latest features and  download the Bitcoin.com Wallet today!

Bitcoin.com is the premier source for everything Bitcoin-related. The site offers many helpful services such as helping people buy bitcoin cash (BCH), participate in cloud mining, and informing enthusiasts with the latest Bitcoin news.  Bitcoin.com is a commercial website that lists wallets, exchanges and other bitcoin related services and 1companies.

Bitcoin.com is the source of this content.  This press release is for informational purposes only and should not be viewed as an endorsement by CoinIdol. We take no responsibility and give no guarantees, warranties or representations, implied or otherwise, for the content or accuracy. Readers should do their own research before investing funds in any company.