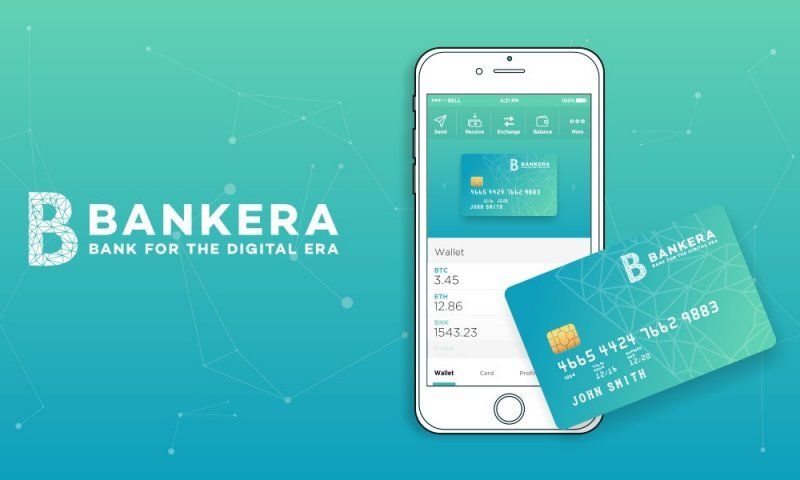 Blockchain finance solution, Bankera has announced the launch of its regulated banking platform, offers details about the pre-ICO.

August 28, 2017, Vilnius, Lithuania – Digital fintech solution platform, Bankera has set out with a goal to disrupt the financial service industry by developing a blockchain based banking service capable of offering innovative banking solutions while reducing the number of counterparties. The solution will also lower the cost of banking for end consumers. Bankera is currently in a fundraising phase and is preparing for a pre-ICO sale of its Banker tokens, starting August 28, 2017. The presale will take place on SpectroCoin, where customers can currently try the minimum viable product.

Launched in 2017, Bankera is an operating subsidiary of the popular cryptocurrency exchange, e-wallet, debit card and payment processor — SpectroCoin. Although SpectroCoin did not initially form as a banking entity, the company chose to develop a core infrastructure comparable to traditional banks to stay competitive within the market and to leverage the existing technology to build Bankera. Identical to regular banks, Bankera’s services focus on three main areas:

All the services will support not only fiat currencies but also digital currencies such as Bitcoin, Ethereum, DASH, NEM, and others. It will make Bankera one of the first crypto-friendly regulated banks in the market.

Bankera also aims to address long-lasting problems by reinventing how users see money today. Many consumers do not invest their money adequately to keep up with inflation. Bankera will offer low-cost investment products, such as equity traded funds (ETFs) and crypto-funds denominated in “baskets,” as proposed by Nobel prize-winning economist Robert J. Shiller. This will help capture inflation and allow customers to keep their funds constantly employed to maximize the potential returns.

At this point, Bankera has the necessary regulatory and IT arrangements and has put together a strong team and advisory board, including Lon Wong, president of the NEM.io foundation, as well as Antanas Guoga, a member of the European Parliament, also known as Tony G – a famous poker player. Guoga is actively endorsing blockchain technology and cryptocurrency at the European Parliament and beyond.

Guoga offered a few words on the company’s advantage over competitors, stating,

“Bankera will enjoy the advantage of being a first operator in the market, as it will be operational at minimal viable product level before the ICO.”

Bankera is currently in a fundraising phase and is preparing for a pre-ICO sale of its Banker tokens, starting on August 28, 2017. During the pre-ICO only 10% of the ICO tokens will issued to finalize the initial version of Bankera before the full ICO. The pre-ICO will be used to determine the hard cap for ICO smart token. Each holder of Banker tokens will be entitled to a weekly referral commission, constituted of 20% of Bankera’s net transaction revenue. The pre-ICO sale will take place on SpectroCoin where customers can currently try the minimum viable product.

To implement its vision, Bankera is launching an initial coin offering (ICO) to issue tokens on the public blockchain. The tokens, called Bankers (BNK) will be issued during the pre-ICO and ICO. The pre-ICO will be launched to determine the hardcap for the ICO, and only 10% of the tokens will be distributed during pre-ICO. The Banker (BNK) tokens after the pre-ICO, will be traded on cryptocurrency exchanges to provide liquidity for token holders.

At the end of August 2017, Bankera will launch its pre-ICO, pricing the token at 1-euro cent. The weekly referral commission (20% of net transaction revenues) for token holders will be sent to a smart contract which will then distribute among them on a pro-rata basis.

For example, if Bankera’s weekly net revenue stands at EUR 10,000,000, then 20% of it (EUR 2,000,000) will be the referral commission sent to a smart contract. If the total number of BNK tokens stand at 50 billion and a token holder is in possession of 1 million BNK tokens, he/she stands to receive EUR 40 worth of cryptocurrency.

Bankera is the source of this content. This press release is for informational purposes only and should not be viewed as an endorsement by CoinIdol. We take no responsibility and give no guarantees, warranties or representations, implied or otherwise, for the content or accuracy.  Readers should do their own research before investing funds in any company.