Will Blockchain be Apart of the New Season Westworld? 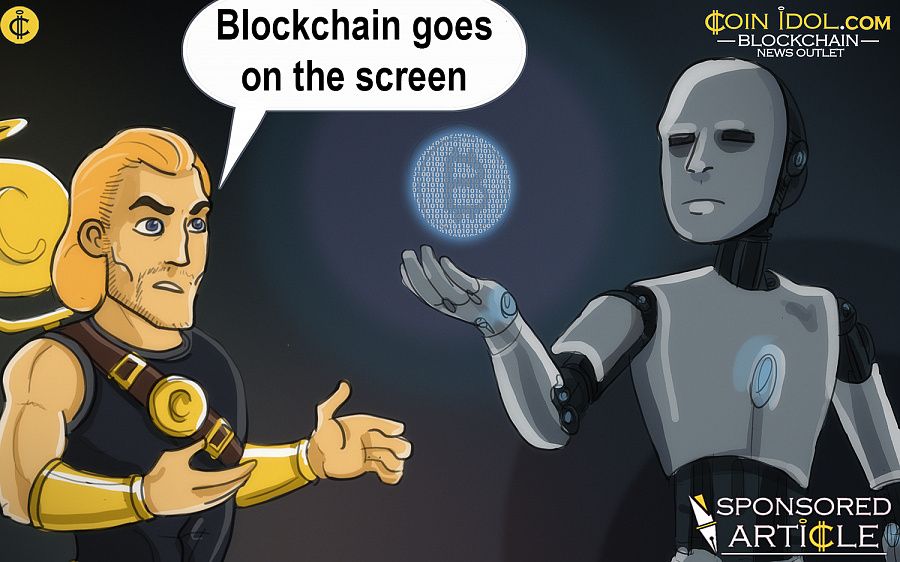 In the future, the Westworld theme park offers its visitors the opportunity to experience the Wild West in a large area of land that includes the frontier town of Sweetwater. The town and land are occupied by "hosts," androids indistinguishable from humans, with advanced programming following a pre-defined set of intertwining narratives, with the ability to deviate from these narratives as visitors interact with them. The hosts repeat these narratives anew each day, having their memories of the previous day erased until they are repurposed for other stories or put away in storage for reuse later. For the visitors' safety, hosts are unable to harm any other living life forms, allowing visitors nearly unlimited freedom to engage in whatever activities they want without retribution, including sex and simulated murder with the hosts. A staff, situated in underground facilities, oversees the park, develops new narratives, and performs repairs on hosts as necessary.

Just a few days before the new season premiere of Westworld season 2, folks are speculating what will happen in season 2, it goes, without doubt, there will be a ton of AI, but what else is in the cards. So if Billions season 3 can touch on cryptocurrencies why can't Westworld talk about blockchain?

Some people might find it hard to find the connection between Blockchain and Artificial Intelligence, but in fact, it’s not that complicated. A blockchain company called AICHAIN plans to make AI on blockchain reality.

AICHAIN is an artificial intelligence ecosystem built on the blockchain, aiming to break global data monopoly barriers. Its aspiration is to create a platform that can facilitate communication, cooperation and data sharing among participants by enabling data transaction, protecting data security and disrupting data concentration, therefore improving the efficiency and productivity of the AI industry and allowing everybody, not only the tech giants, to gain the most out of the digitalization era.

All this might sound unrealistic, but unlike the television series, AICHAIN team has made some of this happen. In a recent news release, they have announced the partnership with EasyLive, a leading social platform with interactive, sharing, live video features, on using AI to make the network more accessible.

If AICHAIN can help EasyLive to build a decentralized live broadcast ecosystem through blockchain technology, this will entirely overturn the existing live broadcast industry's operation model; it will make the economic incentive system itself able to be a fair value allocation mechanism. It is conceivable that EasyLive will focus on anchors and viewers. Through a decentralized, trustworthy approach, the payoffs and rewards of all anchors and viewers will be fair, reasonable and unexploited.

Additional, in the blockchain and live broadcast ecosystem constructed by AICHAIIN and EasyLive, all users (viewers + anchors) will use AIT (token of AICHAIN) as a unit of measurement to conduct circulation transactions on the EasyLive platform. Users will achieve the purpose of value exchange through the free trade AIT.

So if Westworld fans are asking the question if we will see blockchain mentioned in the new season Westworld, the answer is, why not? After all, we are moving towards a smart and decentralized world.