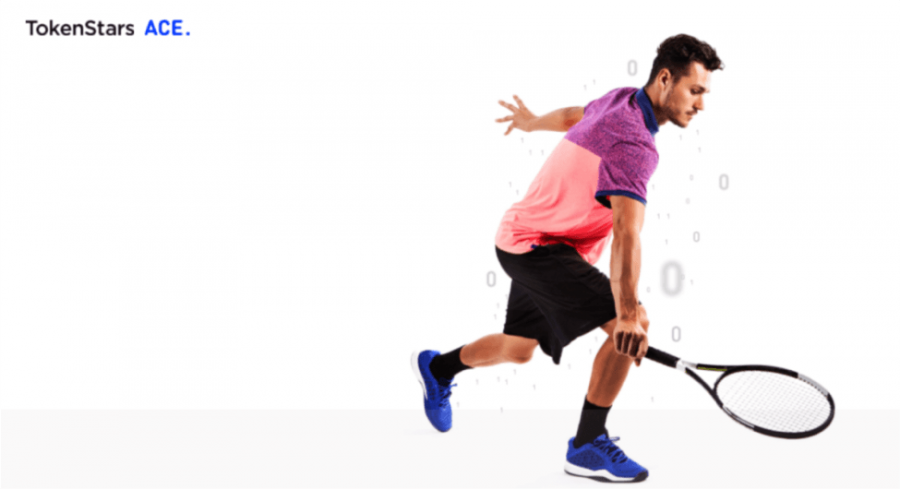 TokenStars, a blockchain project to support athletes and celebrities has announced the launch of its crowdsale starting August 24, 2017. Pre-sale to began on August 1, 2017.

August 4, 2017, Santa Clara, USA – TokenStars, the first blockchain company to tokenize massive celebrities, has announced the launch dates for its first project — the ACE token crowdsale. Pre-sale is scheduled for August 1, 2017, and the ICO is planned to go live on August 24, 2017.

TokenStars is aiming to disrupt talent development by providing funding resources to athletes and other celebrities and decentralizing talent sourcing and promotion. The company’s ambition to tokenize people starts with ACE – a project supporting young and experienced tennis players. With tennis being one of the most popular sports globally, ACE aims to introduce 1 billion tennis fans to the blockchain world. The second project to tokenize football stars will be launched later in August.

“At the moment, the top 10 athlete management agencies have $1.19B in yearly commissions and 3,731 years of contracts signed. The industry is bigger than the GDP of Serbia, Bahrein, Brunei or Cyprus. ACE disrupts this market, decentralizing it and sharing the value among the community.”

Founded by Pavel Stukolov, a Russian entrepreneur with a strong  high-tech and financial background, the project brings together a unique advisory board of star tennis players, global top coaches and scouts, who have a deep knowledge of the industry, e.g. Sergey Demekhine, A-level Global Professional Tennis Coach Association (GPTCA) certification holder, tennis coach with 8 years of experience, former ATP tennis player and Vera Zvonareva’s head coach in 2010-2011 (#2 in WTA rankings, rising from #22 at the beginning of coaching) – Wimbledon & US Open 2010 singles finalist, Australian Open 2011 semi-finalist.

“Lack of funding is a typical problem which almost all tennis stars faced as juniors. Their funding options are limited by parents’ money, loans from friends, and small grants from local tennis federations and talent management agencies. The top 10 TMAs have over $25B in contracts under management and have a monopoly on deciding who is going to have a career and who is not. Mistakes based on gut feeling are inevitable in this process. As a crowdfunded project, ACE has the potential to disrupt tennis talent representation and protect rising stars from being overlooked.”

“Aspiring tennis players need approximately $100K a year to build a career. Some have to put everything at stake – just like Olympic medalist and 5x Grand Slam winner Maria Sharapova, who came uninvited from Russia to Nick Bollettieri Academy in Florida at the age of 9. Her father had to work as a dishwasher just to cover her bills. Later she earned $36.5M in prize money and $285M in sponsorship deals. With ACE, young players like Maria Sharapova can get funding for academy costs, coaches, sparring partners, and tournament participation, as well as help with signing sponsorship agreements.”

The successful initial sale will allow ACE to support at least 20 tennis players and 2-5 established PROs who have already accumulated celebrity status. Depending on the results of the token sale, ACE might manage to sign several full-time coaches and open a small academy for ACE juniors.

At the later stages, TokenStars will use the shared infrastructure and launch the new verticals to tokenize aspiring celebrities, including football, poker, basketball, and hockey stars, plus cinema actors, musicians, and models.

TokenStars is the first blockchain company to massively tokenize celebrities. It aims to disrupt the talent management industry by decentralising it and providing funding and promotion resources to rising stars. Starting with issuing ACE tokens for the tennis vertical, the company plans to expand into new verticals, including football, poker, basketball, hockey, cinema actors, musicians, and models.

Disclaimer: 4KingMedia, its subsidiaries, employees and consultants will refrain from soliciting, marketing or otherwise advertising any ICO asset, investment, token and system to any organization, entity or individual in the US. 4KingMedia will actively seek to refrain from accepting any kind of investment from US citizens, organizations, corporations or any other entity registered in the US. We advise our customers to do the same. 4KingMedia assumes that any investor who decides to invest in any ICO it markets, has read the white paper, understands the implications of local regulation and is aware of the ramifications and consequences of their subsequent investment. Therefore, 4KingMedia cannot be held liable under the laws and regulations put forth by the SEC or any other entity in the US for its marketing or business activity.
4King Media fully complies with AML/KYC laws as required by the financial institutions it conducts business with

TokenStars is the source of this content. This press release is for informational purposes only and should not be viewed as an endorsement by CoinIdol. We take no responsibility and give no guarantees, warranties or representations, implied or otherwise, for the content or accuracy.  Readers should do their own research before investing funds in any company.

Tags
ICO Blockchain Support Pre-Sale Crowdsale USA Funding Management
Most Popular
May 02, 2021 at 11:54
News
South Korea Announces Testing of CBDC Right After Imposing a New Tax Framework; Is It a Coincidence?
May 02, 2021 at 10:36
News
Chainlink Breaks Initial Resistance at $38, Eyes $44 Overhead Resistance
May 02, 2021 at 09:14
News
Uniswap in Minor Retracement, Set for More Upside Momentum
May 01, 2021 at 12:54
News
Russia is Going to Establish a Special Department for Exploring Artificial Intelligence
May 01, 2021 at 11:58
News
Dogecoin Price Pushes To The Upside; Can Bulls Breach The $0.45 Resistance Zone?
More