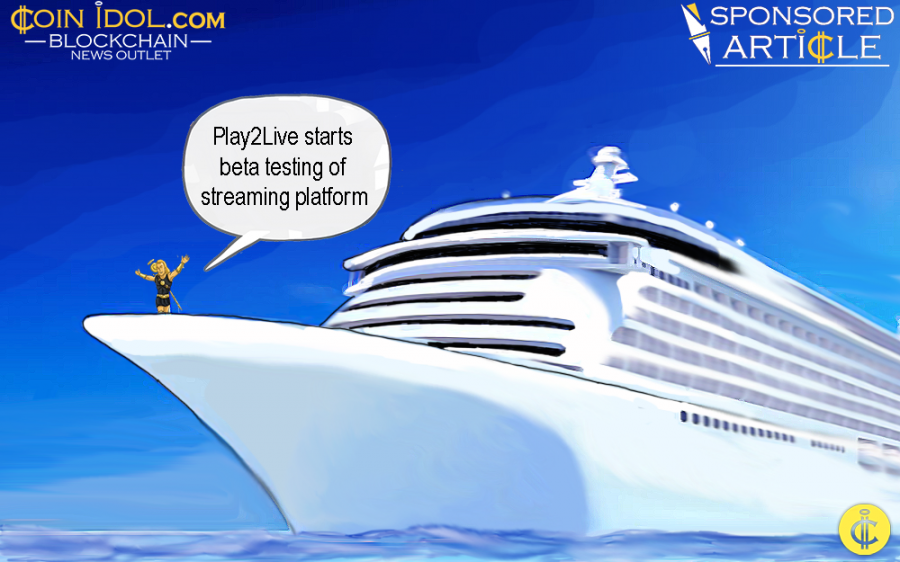 Today, on September 19th, 2018, Play2Live has officially announced the launch of opened beta testing of their blockchain streaming platform to the general public. First access to the closed testing phase was granted on August 15th to media representatives and accredited streamers in order to check the operational capacities of the platform’s basic functionality. Play2Live has prepared for the launch broadcasts from famous EU&CIS streamers and a large promotion campaign, including LUC buyback.

In the opinion of the leading experts, one of the interesting benefits of the project include the possibility of buying and earning LUC tokens directly at the platform's website. The coins can be used for implementing different monetization options, including donations, voting, and for assigning special tasks to streamers. The neural network developed by the project team will be responsible for monitoring the fulfillment of assigned tasks. Play2Live CEO and founder Alexey Burdyko noted that users are in for a vast number of innovations and new features. Some “know-how” have never been used in e-Sports before.

Alexey Burdyko said: "We have been preparing the release of the beta version since the spring of 2018, when the investment campaign of the project (ICO) was completed. Throughout this time, we have strengthened the team and were able to develop and implement a number of innovations not only for Play2Live itself, but for e-sports in general. With the start of public use of the basic functionality of the project, everyone can earn LUC Tokens, and you can buy the tokens directly via our official platform," Alexey noted.

To accelerate the delivery of content from the streamer to the viewer, all streaming platform use the traditional centralized CDN (Content Delivery Network). The Play2Live developers team has created their own CDN solution. It is a geographically distributed network infrastructure that allows users to optimize the delivery of streamed videos to end users and to use our own network bandwidth and 3rd party CDNs to have maximum coverage. The CDN will route you to nearest CDN node for best connectivity the upload speed of video and other digital content in various system access points. As alternative method of delivery we use the p2p-CDN - every user can share his internet bandwidth and get rewarded for it (in LUC).

While describing the benefits of using the Content Delivery Network, Play2Live CTO  Vladislav Arbatov added that the platform has become more safer: "Thanks to the immense computing power, unpretentious software and distributed architecture, the CDN is extremely resistant to DDos attacks, which are the most common means of hacking projects. We have become even more protected and are continuing to invest in our security protocols. For example, we have added our own Level Up Chain blockchain, which supports 10,000 transactions per second and cryptographic "keys". Thus, Play2Live will be the first platform in the world that uses compact devices to provide information protection to the user and ensure the safety of their identification. I want to emphasize that all this is the basic functionality of the platform and many new features are not far off, but for now we are asking all testers to send feedback to help.p2l.tv develop further".

In June, the developers of the project announced the creation of a neural network for the implementation of the functionality of interactive Tasks. They have implemented algorithms for real-time monitoring of streaming videos, recognition of complex objects, and video content with the help of a neural network. Now users can assign interactive tasks to streamers, and the neural networks will track their fulfillment. By voting on Play2Live via LUC Tokens, users can set the price for the performance of specific tasks by their favorite streamers, for example pass the game at the highest difficulty level, or use only certain weapons at a particular time on a suggested map (for example, in fortnite - "eliminate 10 opponents in the factory using only sniper rifles").

Another important component of the beta is the testing of the multicasting functionality. At different stages of the launch, several hundred streamers will be connected to the platform, who will be providing content for the most popular games. This functionality will be used for broadcasts of e-Sports tournaments. Play2Live already has vast experience in international competitions, as the company organized the "CryptoMasters" games in Minsk on February 24-25, 2018. It was the world's first large-scale e-sports tournament in Counter-Strike: Global Offensive, where the winners received a prize equivalent to $100,000. Competitions were broadcast on the MVP-version of the Play2Live platform in seven languages.

At the same time as the closed beta test was announced, Play2Live started the LUC tokens buy back. From 10,000,000 to 100,000,000 LUC are redeemed by the platform itself from the exchanges at a price of up to $0.05 for 1 LUC during 2 months from the 15th of August. Сrypto market experts have explained that in most cases the repayment of tokens by the company is considered as an indicator of surplus in its cash resources. As a result of this operation, the price for the token increases, which leads to an increase in trust in the company among current and new investors and positively affects the exchange rates. The repurchase of tokens for their subsequent cancellation avoids the dilution of the company's capital due to the issuance of new coins. According to Alexey Burdyko, CEO of Ply2Live, the funds received from buybacks is transferred to a separate wallet of the company and will be used to purchase rights to broadcast e-Sports events, marketing and working with bloggers, streamers and other content-makers for the platform.

Currently, Play2Live is one of the most successful blockchain projects of 2018. The company managed to close the hard cap at $30,000,000. Play2live strives to unite blockchain systems and streaming services, where users can earn and spend funds in more than 15 ways, which is three times more than on any of the available counterparts.

In the beta version of the platform, streamers can take advantage of several options for monetizing their content, including a system of donations, tasks and voting, as well as subscriptions to streams for LUC Tokens that can be purchased directly on the Play2Live platform.

According to the project’s management team, further updates will be released very soon. Follow the project’s latest news on its official website and in social networks:

Tags
Testing Platform Blockchain Streaming Promotion Media Token Companies
Most Popular
May 13, 2021 at 11:05
News
Giant Telecom Companies Turn to Blockchain to Speed up Technological Progress
May 12, 2021 at 15:03
News
Cardano Consolidates Below Recent High as Bulls Attempt to Breach $1.80 Resistance
May 12, 2021 at 14:03
News
Most African Countries Cannot Access Akoin. How True is the One Africa, One Koin Sentiment?
May 12, 2021 at 14:00
PR
Spring and Bondly NFT Partnership Unlocks Digital Potential for Creator Economy
May 12, 2021 at 12:59
News
Bitcoin Cash in Sideways Move, Battles Resistance at $1,600
More