The Anatomy of a Perfect Ponzi scheme: How Karatbars International Scammed People Out of $500MM with a Worthless Coin

Why do Pyramid schemes captivate people time and time again?
They promise a bright future, financial independence, a life free of trouble and problems - all while being part of a revolutionary movement that will change the world as we know it...

What makes them so deadly effective?

In theory, it’s easy to spot a Pyramid/Ponzi scheme.

You get a grandiose vision, tons of hype, a ground-breaking new system that somehow nobody else thought of before - and the requirement to get an ever-increasing number of people hooked into the system.

When you see this combination, you can be 95% sure that you’re dealing with a Ponzi scheme, masquerading under an MLM-style cult.

But the problem is that people aren’t rational beings.

Even though all the signs are there, the promise of fantastic wealth and opportunity still mesmerizes people to ignore all the red flags because “this one is different. It’s the one”

And unfortunately, there are even dedicated companies that exploit this. Companies like Business for Home and Netcoo.

As a result, people can be easily manipulated this way, even in the face of overwhelming evidence that they’re being scammed. They’ll still invest even more for the promise of a better tomorrow.

The same thing happened with Karatbars International recently, which was once heralded by Forbes as a must watch coin in 2019, and aggressively advertised by Cointelegraph.

The Anatomy of a Ponzi scheme

As any good Ponzi scheme, Karatbars and their founders, Herald Seiz, Josip Heit, Alex Bodi, and Ovidiu Toma promised something extraordinary: to revolutionize our payment system with the power of the blockchain and ensure “safe gold” for people as an investment vehicle.

They created a brand new currency for this, called the KaratGold Coin - or KBC for short -  ( originally called KaratBank Coin), which, in essence, is a blockchain-based cryptocurrency that is linked to physically deposited gold in the form of so-called CashGold.

In the beginning, each 0.1g of CashGold was worth 10,000 KaratBank Coins (KBC), which you could buy with real money.

However, due to the unregulated nature of this market, the exchange rate between KBC and real money fluctuated quite heavily - from 0.4 to 2 cents per KBC, a 500% difference.

Karatbars promised an attractive 40% commission to their affiliates. On top of that, they also promised various additional commissions that would give people “residual passive income” - the dream of financial independence that we all want.

Of course, everything was hyped up to look like it’s an “amazing opportunity”, “the next future payment system”, something that “nobody can scam” (and companies like Business for Home and Netcoo exploited this even further)

They even got Nitsa Nakos, arguably the #1 person when it comes to developing MLM systems, to promote KBCs heavily, with big promised savings to affiliates who would bring in the most people (classic Ponzi scheme).

Despite all these efforts, the problem was that the popularity of KBC still wasn’t growing enough.

In order to get more people to invest, Karatbars International did 2 important things to scale its operation.

First, they renamed the “KaratBank Coin” to “KaratGold Coin” to appear more valuable (yet the original “KBC” acronym remained).

And secondly, they announced a special mega-event called the “Gold Independence Day” to be held on the 4th of July, 2019, in the Bellagio, Las Vegas - during which people would be able to exchange their KBC coins for real physical gold at a crazy-good rate of 100 KBC = 1g of gold (making a 40X return on investment, in essence).

This was certainly a grandiose promise - something that’s almost impossible to believe.

However, Pyramid Schemes use these types of big promises all the time… It’s always something that has “never been done before in history”, that’s “starting a revolution”, and, of course, the classic “life-changing opportunity”.

On the 26th of October, 2018. CEO Harald Seiz even re-affirmed this in a personal message: “Yes, we need a better world and I am looking forward to the future. I guarantee everyone, that they will receive 1g gold for 100 KBC each on Independence Day (July 4, 2019). The KaratGold Coin (KBC) is the first Coin actually backed by Gold.”

Since then, this “Gold Independence Day” has been hyped up as much as possible with a massive marketing machine.

Besides this, Karatbars also created several PR campaigns to build trust in its investors and establish more credibility. In fact, reliable media companies like Cointelegraph accepted payments to promote Karatbars with banner ads and sponsored content.

Karatbars paid credible sources like Cointelegraph to promote the scam.

Video content was a major part of the promotion. In this video, Karatbars CEO Harald Seiz and chairman of the board Josif Heit announced that they would buy and hold 5 tonnes of real gold to serve as a foundation for a new payment system, as well as backing for Karatbar coins.

They even showed videos where they deposited 1.4 Tons of gold inside an impressive vault in Hong Kong - with dramatic music playing in the background to highlight the emotional impact.

Of course, later it turned out that all of this was fake.

Instead of buying gold, the executives used a lot of the incoming investment to buy luxury cars, villas, yachts, and even private jets.

Scores of families have invested most of their life savings into KBCs, hundreds have spent all their money, while some even sold their house to get in on the action.

All so they can fuel the founders’ lavish spending habits post-ICO (there’s even public record of CEO Harald Seiz’s purchase of a €10M house, bought with money from investors). 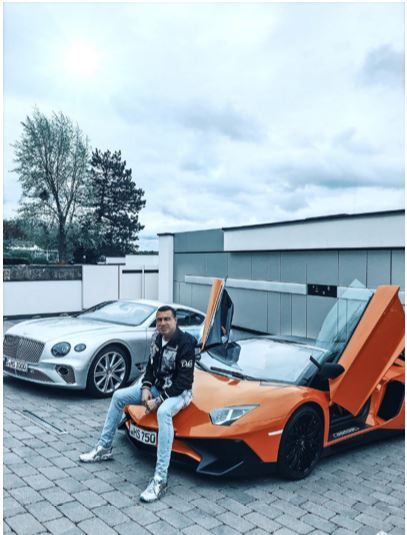 Unfortunately, the marketing machine was working so well that most people still failed to realize that this is, in essence, a Ponzi scheme.

Even blockchain industry's most reputable media site succumbed to accept payments for promoting the Karatbars Ponzi scheme (not to mention Forbes as well, also here).

And when the BIG “Gold Independence Day” did happen on the 4th of July, everyone went bonkers!

In a recent video recording of the event on the 4th of July, 2019, CEO Harald Seiz “guaranteed” an exchange rate of 100 KBC per 1 Gram of real gold for affiliates, no matter what.

Or in other words, a crazy 40X Return on Investment!

After this, you can hear the entire room light up and cheer him for his big announcement that would “change everything” and supposedly make everyone rich.

Unsurprisingly, the hype campaign was extremely effective. But as warned by a few observant eyes in the coin space, it was just a facade.

The entire “Gold Independence Day” event was a desperate attempt to prop up the value of the Ethereum-based KaratGold Coin that has been steadily winding down for some time.

Herald Seiz, Josip Heit, Alex Bodi, and Ovidiu Toma managed to get a massive cash infusion after this event, even though nobody at the event was able to convert exactly 100 KBCs into 1g of gold.

Still, the hype was so strong that before the event, KBC had peaked at 12.6 cents, while the 24-hour trading volume after the event managed to broke through the $12 million barrier.

But then - as all Ponzi schemes do - the system began to implode, and people began to dump the coin hard. Today it’s sitting at 2.5 cents, less than one fifth its previous value - or an approximate 80% drop!

●        It’s very hard to create sustainable passive income with it

Needless to say, investors were pissed

Chairman of the Board Josip Heit tried his best to please angry investors on the 8th of July, postponing the promised 100 KBC = 1g gold fairytale to October, people didn’t buy it.

When asked “What is happening with our coin?”, Seiz simply admitted that there’s no value behind KBC coins because “there’s no business attached to them”. They’re basically worthless.

Regardless, he still tried to sell the promise of even bigger returns to investors, encouraging them to hold on to the coin, so that their value doesn’t drop further.

This confirms once and for all that the coins weren’t backed by gold at all - they were worthless, and Herald Seiz, Josip Heit, Alex Bodi, and Ovidiu Toma’s empire turned out to be a just classic Ponzi scheme, that’s dependent on creating the illusion of never-ending demand while providing nothing of real value underneath.

However, once Karatbars affiliates realized that they’ve been scammed, they tried to salvage as much as they could, creating this downward spiral in KBC price.

Those who had a low-risk tolerance got out with “only” millions of dollars in cumulative losses, while those who still believe in Herald Seiz, Josip Heit, Alex Bodi, and Ovidiu Toma’s grand vision are holding onto their coins, hoping for a better future, and preventing an even bigger slide in price.

Yet, in spite of its huge influence, many took the challenge and fought back against Karatbars International.

For example, on the 21st of August, 2019, a marketing agency achieved a major victory in a court case against Karatbars International, exposing most of their lies, misdirections, and major contradictions in their submissions.

In essence, Karatbars International and its founders, Herald Seiz, Josip Heit, Alex Bodi, and Ovidiu Toma tried to sue consultants and subcontractors for exposing the truth that the coins are worthless, demanding various information claims, accounting claims and also the transfer of KBCs.

But the court found the application to be unsubstantiated and doomed to failure, so it denied Karatbars what it was asking for (§§ 935, 940, 917f ZPO)

This clearly proves that the ‘charges’ from Karatbars were false, the claims that the litigation is ongoing are nonsense, and that Karatbars International was only trying to find scapegoats for its own failure.

So what’s the future of Karatbars International and the people who have invested in it?

There’s no need to sugar-coat it, it is what it is. According to all evidence, Karatbars is a scam. It’s Bitconnect 2.0 (even the Bank of Namibia has declared it a scam)

In addition to the obvious, there have even been several reports of Karatbars International engaging in illegal capital raise within the US, other failed lawsuits against service providers, a lack of delivery post-ICO - and extraordinarily lavish spending habits of its founders, Herald Seiz, Josip Heit, Alex Bodi, and Ovidiu Toma.

Furthermore, neither Karatbars International nor any of their shell companies are registered to offer securities in the US. Despite this, to this date, US regulators have not taken any official action against the company.

In addition, certain companies, like Business for Home and Netcoo are still actively promoting such “incredible opportunities”.

And this is a problem - especially considering the fact that Karatbars is also planning to launch KaratNet this October, a supposedly “innovative” new payment system, spearheaded by Ovidiu Toma.

It remains to be seen what will happen once the service goes live:

Will investors and affiliates get a new glimmer of hope? Or will it turn out to be just one more way to dupe people out of even more of their life’s savings?

I think we all know the answer. Facts speak louder than hyped-up words.