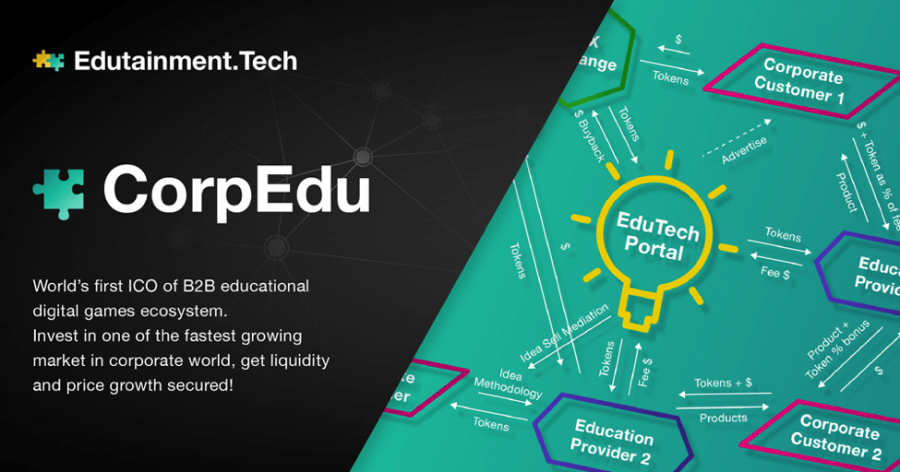 CT Influence Games and BizWorld announce one of a kind Double pre-ICO to promote a collaborative effort of three different companies to create educational and entertainment game solutions.

August 3, 2017, Glasgow, UK – Commolior-T LP, the company behind games for businesses and the smart audience has joined forces with two other game developers—BizWorld CCG LP and Social & Political Games LP to create a new breed of educational games targeting both individual casual gamers and businesses. The collaboration has announced the launch of its “Double ICO”, where investors can purchase two different tokens, created over Waves platform. Investors can participate in the pre-ICO crowdsale starting August 1, 2017 and company decided to accept BitCoin cash as well as an experiment.

The Double ICO involves the crowdsale of two tokens; SmartGames – a token enabling dividend based investment in a number of existing and planned online games for smart audience and CorpEdu – a token for liquidity (with buy back) investment in B2B educational digital games platform, based on an existing profitable project.

With the Double ICO, the participating companies intend to divide the huge segment of intellectual games for “smart people” into two distinct segments. The first segment will include individual end customers, while the other one purely caters to the B2B sector. In a corporate setting, these games can prove to be quality digital education tools with their own ecosystem built around it. The companies together already hold rights to some of the popular games like BizWorld Guru, Business Games Club, Persona Quest and more. In addition, CT Influence Games also owns the Simulate.Company project which is built along the lines of Business Games Club and offers B2B educational services.

Explaining the opportunity presented by the educational and smart games segment, the CEO of CT Influence Games Alexander Tolkach said,

“Since 2014 I witness only growing demand for video games from grown-up people, who wish to have quality relaxation and entertain their brains. Fortunate for us, this market is still underexplored, as most developers pursue more massive target audiences like teenagers. And educational component of games for corporate usage is only emerging in its true capacity. So, we already know both of those markets and want to push fast in chewing out decent market share based on our experience.”

The companies, Commolior-T LP (brand owner of CT Influence Games), BizWorld CCG LP and Social & Political Games LP already have a significant portion of games and experience required to cater to both B2B and B2C markets ready. As they work towards the Double ICO to create a revolutionary gaming ecosystem, the companies are raising funds required to launch a PR campaign for the crowdsale through the upcoming pre-ICO. The pre-ICO will begin on August 1, 2017, allowing users to purchase 75,000 coins of each type at a huge discount of 50%. Once the pre-ICO is over, the Double ICO will start by mid-august.

“When creating BizWorld – massive online collectible card game about business management – we were stricken by huge demand and great player response even at the level of play-tests. Now game signs contracts with big web publishers – but we believe there is huge market for such games, but one needs to create new publishing expertise in order to pursue it. It is not exactly like marketing game for sexy elves or shooter. So, why not us – we’ve spent years already studying our type of audience.”

The creators find lots of application for their project, not only for entertainment but also as a training and evaluation tool for corporates. The gamified approach will not only make the whole process fun but also effective. More information about the crowdsale is available on the official website.

Commolior-T LP is the source of this content. This press release is for informational purposes only and should not be viewed as an endorsement by CoinIdol. We take no responsibility and give no guarantees, warranties or representations, implied or otherwise, for the content or accuracy.  Readers should do their own research before investing funds in any company.