Can CanYa Bump Upwork, Fiverr, and Easy Out Of The Freelance Market? 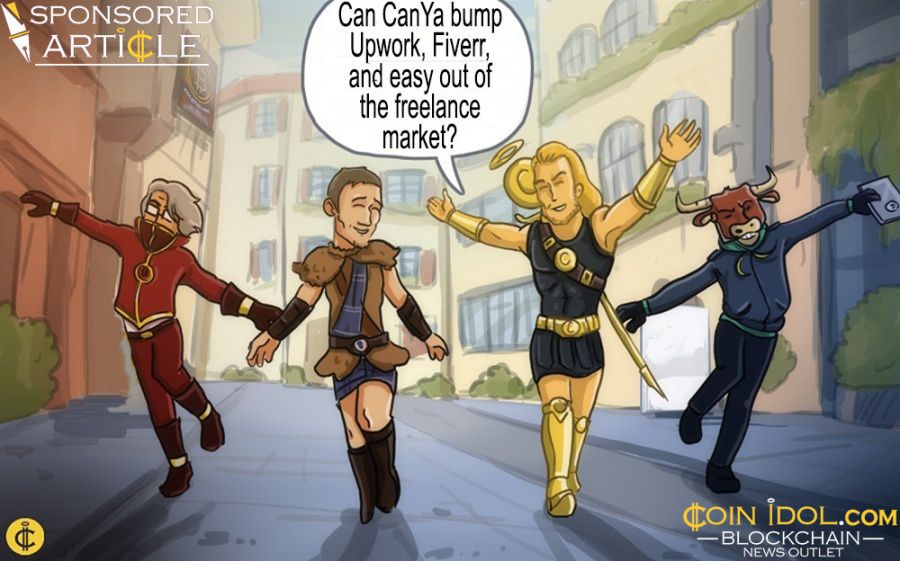 In the last 40 years since the invention and democratization of the internet, use has grown radi-cally. Some estimates indicate that as many as 4 billion unique individuals  are online. Yes - bil-lion with a B. In other words, more than half of the world’s total population.

This sort of cataclysmic adoption has also been paired with exploding opportunity through online services. The internet has morphed from a simple information sharing platform into a comprehensive entity for nearly everything. E-commerce has particularly come into its own, with sales totally nearly 10% of gross US transactions. Since 2008, this rate of online transactions has been increasing, even during the midst of the global financial crisis.

In this new gig economy, corporations like Upwork, Fiverr and Etsy have sought to connect freelancer workers and artists with employers, while Ikea made headlines by acquiring Gig economy company TaskRabbit, which provides handymen to assist with various manual labor tasks. These connections show that the world is fast moving toward a gig economy structure, with as many as 34% of all American workers functioning in this capacity.

While these companies represent a significant change in how employment online fuctions, they are the first generation of such portals, and are showing considerable signs of stress. CanYa, an Australian blockchain-based platform, plans to be the online marketplace to replace sites like Upwork and Fiverr.

CanYa is a decentralized online marketplace where service providers can connect with customers and send and receive payment via cryptocurrency. The blockchain platform permits sellers to interact with employers directly--a truly peer to peer (P2P) experience, unlike the veiled systems at Upwork and others.

The platform is a decentralized exchange where consumers and users are able to connect directly, effectively outsourcing the corporate intermediary who hosts agreements. This produces increased transparency and reduced cost.

On the distributed database system, freelancers can list, promote, and sell services at the price of their choosing. They can select from a wide scope of fee structures, including single transactions and continuing platform agreements. CanYa’s protocol is based upon true meritocracy—better freelancers will receive greater visibility and opportunity, which incentivizes good business and reduces false claims.

Employers, too, can sift through services and select those that best suit them. They have the choice to purchase single-event services (car repair), or extended ongoing maintenance programs like nannying or tutoring services.

Though blockchain technology may appear to be too technical for the average user, the application is easily downloadable on the major app stores and the seamless and simple app allows consumers to find one other quickly and efficiently, all while ensuring transparency and protection.

Additionally, the company offers far more flexibility than most service-style platforms, while at the same time providing better security than traditional, centralized marketplaces. And, what’s more, by removing the centralized hub, CanYa is able to offer far wider service options at substantially better fee prices for freelancers and employers alike.

The Deeper Issue of Volatility

Cryptocurrencies hold promise for excellent digital economics. Because they are free from governmental control and central bank inflationary policies, they operate within a truly free market. Nevertheless, because of this freedom, cryptocurrencies are generally plagued with extreme levels of volatility. This volatility for a currency is like nothing see before.

This has led to some some level of doubt regarding how freelancers would approve of services being paid for with a changing asset. The company understands the concerns and has built in an internal hedge to protect consumers on either side of the transaction.

CanYa’s platform utilizes a coin with a fixed value as collateral for the CanYaCoins within the platform. In this way, the values of coins used in transactions are fixed, meaning that one dollar in will always equal one dollar out, regardless of the price fluctuations during the course of the contract.

The result is consumer peace-of-mind on both sides of the transaction. Both freelancers and employers can conduct business without fear of losing money for something they’re unable to properly control. The proprietary platform promises to radically shift the way the gig economy works forever.

ICO In The Making

The startup has already released a beta platform in Australia in December 2016 with private funding. However, to meet their expected global growth plans, the company requires additional funding. The ICO begins in a few days, and will help CanYa to create a functioning cryptocurrency payment structure. However, the presale has already occurred with huge response from the community, raising 4530 ETH (about $1.6 mln) in a short time.

The full launch is scheduled to occur in March 2018 while a second version is booked for July 2018. They hope to roll out an advanced customer connection feature, which pairs customers with the most appropriate providers in their area for each search. This addition is planned for October 2018. As the platform continues to expand, companies like Upwork, Fiverr, and others may find the competition is more than they bargained for.