Social Media and Blockchain: Where Everyone Has Voice and Freedom 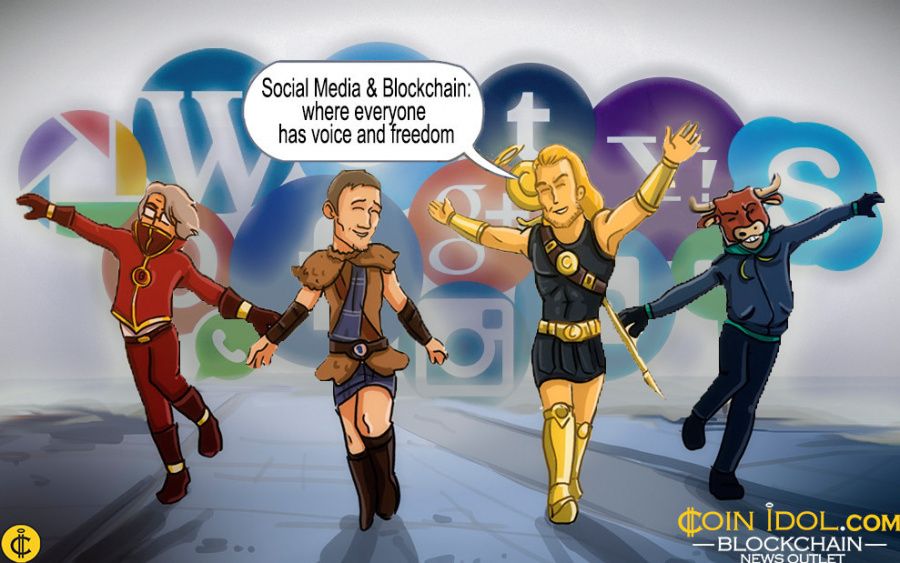 Internet has instigated a huge paradigm shift in the way we communicate with each other and participate in global discourse. Historically governments and large corporations used to boast media monopoly when it came to addressing mass audiences. Media channels were objectively too expensive to build and maintain hence big players had little competition when pushing their narratives. But everything changed at the turn of the century.

Social media is a fairly new invention yet we can hardly imagine our life without them now. Today every adult human being does not only consume content without limits, but is also a content creator by default with a potential reach of millions followers.

Still as progress (social and technological) goes on, the existing social media scene is being found wanting. The market of global uninhibited communication has seen another wave of monopolization by such giants like Facebook and Twitter and needs to be challenged again.

Blockchain, the latest challenger, brings many benefits to the table which current industry leaders are lacking. Among them is distributed ownership, profit-sharing and protection from censorship.

Up until very recently all existing social networks employed the same business model. Basically, users were granted an opportunity to broadcast their content for free while the platform’s owners capitalized on the tremendous value generated by millions of users.
With the advance of blockchain it was only a matter of time until someone realized this industry urgently requires decentralized alternatives.

It should be mentioned that traditional social media does offer users a surrogate “encouragement” for all their efforts (the amount of likes, followers and comments received), but retains the actual value content generates. That is not how it works in blockchain based organizations. Blockchain-based organizations come with their own cryptocurrencies which allow users to easily monetize their activities within the platform.

Another important quality of blockchain is that once broadcasted on the public ledger data can not be deleted or altered. This is in fact a progressive but also somewhat frightening feature. It counters all forms of centralised censorship and promotes free speech but it is also unforgiving to every slightest mistake one makes.

Facebook lets you delete your posts and comments. Blockchain-based social media might just make you feel forever sorry for a silly comment you left ten years ago. The new generation spending their teen years in this new environment of absolute transparency will have a hard time growing up with this new paradigm, having their entire lives, including beliefs, actions and relationships, meticulously documented for public scrutiny at any point in the future. Biopics and historical research will suddenly become fairly simple genres and people will have to watch their every word very carefully.

To this date a score of blockchain social media platforms have popped up and some of them have seen a certain level of renown already.

Perhaps the most well-known project is Steemit. A platform resembling Reddit that rewards users for constructive activities like creating content, commenting, liking and sharing. Basically, whatever you were doing on Reddit for free will earn you steem dollars on Steem. Similarly to Reddit, when a Steem post is upvoted it becomes more prominent on the site and all those involved in the process are rewarded not just with likes but with cryptocurrency. Steem Power tokens are also kind of a share in the company so each community member is also a co-owner of the entire platform.

Akasha is a project based on Ethereum blockchain. It employs IPFS, a distributed file system on a p2p basis. Akasha resembles the usual social media platforms like Medium but the content is broadcast across the entire Ethereum network and upvotes data will travel with Ethereum microtransactions, allowing popular posters to earn some ETH almost like if they were mining.

Synereo is another platform disrupting the market of centralized social media. Synereo has its own blockchain and native cryptocurrency called AMP. Users not only get paid for the content they create but they can also spend AMPs to amplify their messages (increase their reach) and AMPs thus spend are divided between users who read them. Basically, Synereo allows users to monetize their attention, just like BAT and AdEx will do for online ads market.

The new social platform of 2017, Matchpool, is a slightly different beast. This Ethereum-based project endeavours to build a platform that will combine features of Facebook, Slack and Tinder. The signature feature of Matchpool are “pools” or user-created groups, a mix of Facebook groups and Slack channels. Pools can be dedicated to virtually anything and serve a simple purpose - bring like-minded people together.

Monetization model is also quite simple here. Platform’s own Guppy (GUP) tokens will be earned by creating highly sought after pools and successfully matching people according to their interests. The platform has gone alpha on July 12th and is now in public testing stage.

Other projects can be named that play on the same field. One of them is Decent, a platform specializing in p2p content distribution and broadcasting. It not only allows content creators to monetize their work without intermediaries but offers an advanced blockchain-fueled copy protection technology. Another one, project Decorum, is being developed by the team behind cloud storage service MaidSafe. Decorum concentrates its efforts on security, intellectual property protection and other identity protection tools provided by blockchain.

Of course we should not forget about blockchain social media projects who have met some problems in their development. There were, for example, attempts to build a social media based on Bitcoin’s blockchain, Yours being a prominent project in this group. Unfortunately, developers soon found Bitcoin to be too expensive to run their network and have since been working on switching Yours to Litecoin. And as always there were projects who looked promising but failed to pull their weight early, like CoinAwesome, Minds or ZapChain. These guys are not coming back.

So far we have not witnessed mass adoption of blockchain-based social platforms but it is safe to say that societal evolution will inevitably lead progressive content creators this way. Just as TV is being swept aside by YouTube, YouTube itself will one day give way to a new decentralized and free solution. Which platform will be the one to rise on this wave of socio-economic liberation?

Right now community’s eyes are on Matchpool and Akasha who are supposed to go beta this year. Will they eclipse Steem and achieve mass adoption? It remains to be seen.