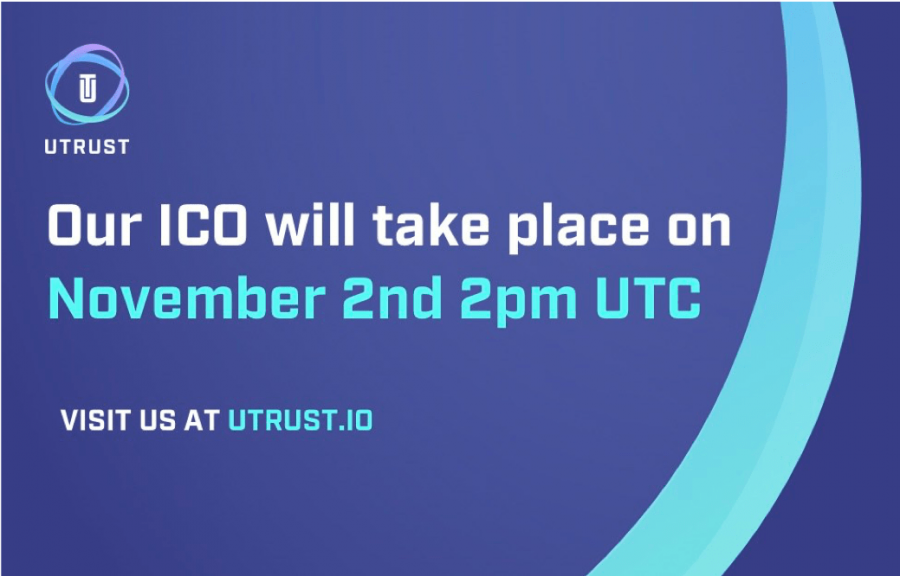 UTRUST will embark on a global awareness campaign that will see the company participating in major blockchain conferences across three continents. UTRUST’s blockchain-based platform will launch through an ICO on November 2nd 2017 (2pm UTC), as it works to bridge cryptocurrency payments with 2.5 billion unbanked people and merchants.

October 20, 2017, Zug, Switzerland: It is estimated that 2.5 billion people still do not have access to the global financial system. Their digital inclusion is predicted to boost the GDP of emerging economies by $3.7 trillion by 2025, buoyed by some 95 million jobs created as a result of blockchain revolution in unbanked countries.  UTRUST seeks to capitalize on the boom of developed markets while leveraging the potential of emerging ones.

In view of this, UTRUST will commence on an awareness campaign that hopes to advocate for its innovative platform and raise its profile as a pioneer in blockchain solutions for the unbanked. So far, it has confirmed its participation in a series of nine key blockchain conferences scheduled to take place over the remainder of the year:

UTRUST believes these conferences are opportunities to strike up new, relevant partnerships in the areas of cryptocurrency development and financial technology, harmonizing multiple efforts to bring blockchain’s disruptive technology to digital payments and emerging markets.

Recognizing the global trends of cryptocurrency regulation and pre-empting the impending need for a standardized KYC/AML for regulated exchanges, UTRUST remains committed to fulfilling all necessary requirements that would result in a solution that is legally compliant and future-proof.

UTRUST continues to make progress on legal recognition and legitimization in Switzerland, following its initial step of getting incorporation as a GmbH (Swiss equivalent of a limited liability company). An announcement will be made in the near future regarding the first steps of UTRUST’s AML/KYC onboarding.

UTRUST’s end goal is to provide all the benefits of fast, secure, convenient, and inexpensive cryptocurrency transactions, in tandem with the world’s first cryptocurrency payment protections, which consumers need to fully embrace blockchain technology en masse.

With 2.5 billion unbanked people in Emerging Markets yet to benefit from financial inclusion, UTRUST is also planning to build the bridge to enable the unbanked worldwide to access the mainstream global financial system.

UTRUST’s public  ICO will be held on November 2nd. The company will use the collected funds to establish key industry partnerships and to develop the world’s first PayPal-like cryptocurrency payments platform. The ERC20 compatible tokens are created over the Ethereum protocol, and can be used as a means of payment on UTRUST’s payment gateway along with other cryptocurrencies.

UTRUST’s token can be used for making zero fee payments to the thousands of merchants accepting any cryptocurrency via UTRUST, and be traded against other currencies on supported exchange platforms.

UTRUST will allocate a certain portion of the revenues to buyback and destroy the tokens in circulation. Being a deflationary currency by design, the demand for UTRUST tokens will increase with time, which combined with buyback should lead to appreciation in its market value.

To learn more about UTRUST’s ICO please go to:  https://utrust.io/ico

UTRUST is backed by a highly experienced team from various sectors including corporate management, startups, payments, cryptocurrency development, law, finance, and computer science. Some of the prominent members of the team include:

Nuno Correia is an early cryptocurrency investor who has been involved in the cryptomarkets since the beginning of 2011. Having founded multiple B2C businesses in the past, Correia has a background in Law and Marketing, and his passion lies in transforming the future of digital payments.

Filipe Castro holds a business degree from MSENG and is passionate about disruptive technologies. He has experience developing electronic payment systems and other software solutions during the early days of his career. Castro is engaged in business development and strategic development of new ventures.

Artur Goulão comes with previous experience in the payments industry. He has previously donned the role of a CTO in one of leading digital payment platform and is currently serving as the Head of Development at a Swiss-based Cybersecurity company. With a background in computer science from IST and MIT, Goulão is well-acquainted with both classical and blockchain smart contract based approach.

Founder and Product Manager at several startups prior to UTRUST, he has been leading different teams to build highly-reliable software products, with a focus on the end user experience. Previously, he has worked together with major international companies such as AT&T, Betfair, Airtel, and Uphold, being responsible for the vision outline, goals and product strategy of solutions used by millions of users.

Other significant team members include Luis Ferreira as Head of Engineering; Laura Esteves as Head of Operations; Joao Ferreira as Head of Design; Nick Olender as Head of Sales and Partnerships; and Francisco Baila as Product Designer. UTRUST has a team of software engineers like Miguel Palhas, Gabriel Poca, Ronaldo Sousa, Fernando Mendes, Bruno Azevedo, Pedro Costa, and Joao Justo.

UTRUST is the source of this content. This press release is for informational purposes only and should not be viewed as an endorsement by CoinIdol. We take no responsibility and give no guarantees, warranties or representations, implied or otherwise, for the content or accuracy. Readers should do their own research before investing funds in any company.