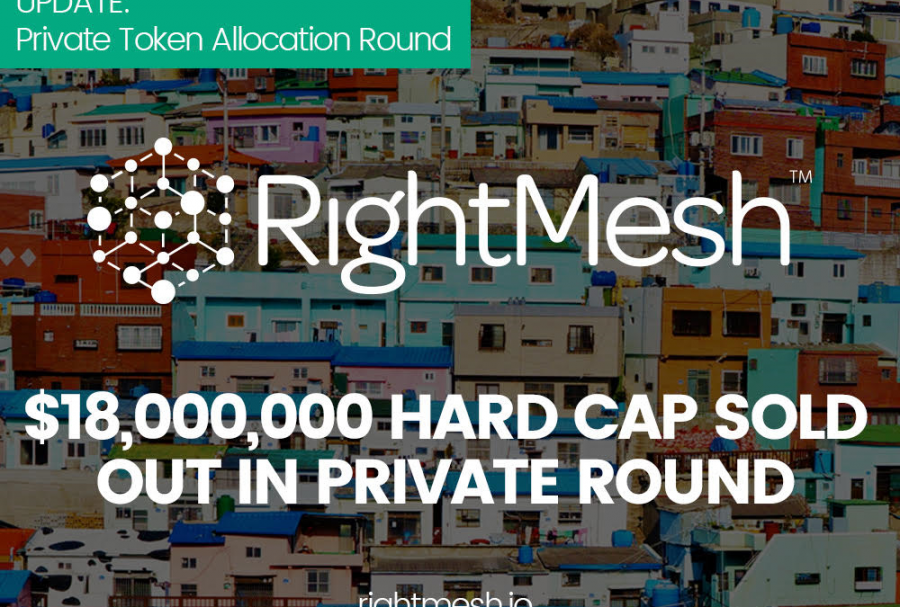 RightMesh must turn down millions in contributions just days after opening the private token allocation due to overwhelming interest in their token generating event, for their mobile mesh networking and blockchain platform.

Less than one week after opening up registration for private contributions from Accredited Investors,  RightMesh has reached its substantial internal hard cap of $18M. Would-be-contributors must now wait for the public allocation period commencing on February 15th, 2018.

“We have been overwhelmed by the positive response from the community. It is a strange place to be in, turning down millions of dollars, but it’s important to the health of the network that the tokens are widely distributed, and we want to do the right thing and ensure that there are enough tokens remaining for the public.”

The Token Generating Event (TGE) will provide an opportunity for interested parties to contribute funds in exchange for the reward of MESH tokens. The tokens will be used within the  RightMesh ecosystem, allowing users to pay others within the network for data and device resources. Content providers, app developers, game makers, and big brands are some parties interested in MESH tokens as a way of reaching billions of currently unreachable people.

With a mission to connect the world through mesh networks and the tokenization enabled by blockchain,  RightMesh seeks to make a dent in connecting the estimated 4 billion people who remain unconnected and disenfranchised from the social and economic benefits that connectivity entails. The company recently released its  beta trial SDK to select app developers with the aim of expanding the number of mesh-enabled applications available worldwide, particularly in emerging markets where Internet is slow and there are few options for communication and data exchange.

The TGE officially begins on February 15th, 2018 when MESH Tokens will be made available to the community in exchange for contributions to the project. The maximum cap for total contributions will be US $30,000,000. Each contributor must go through comprehensive KYC/AML requirements, and the contributions will only be processed and accepted via Bitcoin Suisse AG, a Swiss-based financial service provider specializing in crypto-assets.

RightMesh, in an abundance of caution, is not undertaking a public sale of its tokens in either Canada or the US. Pre-registration as a Bitcoin Suisse client is required for all contributors and can be found  here

RightMesh GmbH (a Swiss Company in incorporation), incubated by multi-award winning parent company  Left, who itself is a certified B-Corporation located in Canada, is on a mission to bring connectivity to the next billion users by multiplying the combined power of blockchain, mesh networking, and its own MESH tokens. RightMesh wireless networks are self-forming, self-healing, and self-regulating, using various technologies in existing smartphones and IoT devices rather than relying on traditional infrastructure and Internet Service Providers. RightMesh’s networking technology is already used in a content-sharing and local messaging app called “YO!” which has received over 1 million installs, and is actively used in emerging markets. Further applications are being developed via the RightMesh SDK, a free platform and protocol for use by others who want to build or retrofit additional mesh applications.

RightMesh is the source of this content. This press release is for informational purposes only and should not be viewed as an endorsement by CoinIdol. We take no responsibility and give no guarantees, warranties or representations, implied or otherwise, for the content or accuracy. Readers should do their own research before investing funds in any company.

Tags
Token Networking Blockchain Network Event Platform Mobile Companies Exchange
Most Popular
May 01, 2021 at 12:54
News
Russia is Going to Establish a Special Department for Exploring Artificial Intelligence
May 01, 2021 at 11:58
News
Dogecoin Price Pushes To The Upside; Can Bulls Breach The $0.45 Resistance Zone?
May 01, 2021 at 10:10
News
VersoView: Building Brands and Communities with Unique Blockchain Publish, Engage and Reward AI Solution
May 01, 2021 at 09:16
News
Polkadot Resumes Fresh Uptrend, Targets Resistance at $48
Apr 30, 2021 at 14:28
News
Ethereum Faces Rejection At $2,800, Consolidates Above $2,700 Support
More