Hong Kong, 10 August 2018 – ExCraft (www.excraft.com), a cloud-native cryptocurrency exchange based in Hong Kong that implements a DAO governance ran by the users and pools, was launched today. ExCraft stands out by being a community and pool focused exchange, rewarding traders through a combination of “Proof of Existence” (PoE) and “Proof of Stake” (PoS) mechanisms, allowing power-users to create pools, vote for new project listings, and even create dedicated pool exchanges based on its immutable and fair PoE and PoS meritocracy.

The First DAO-based Exchange – “ExCraft, Craft Your Own Exchange!”

ExCraft introduces the first decentralized autonomous organization exchange managed based on a single or pooled user trade volume meritocratic Proof of Existence voting system. Verified KYC (Know Your Customer) users will be able to vote on listing new projects to be sponsored in the exchange. The ExCraft community values all users input as well as those who trade most frequently. 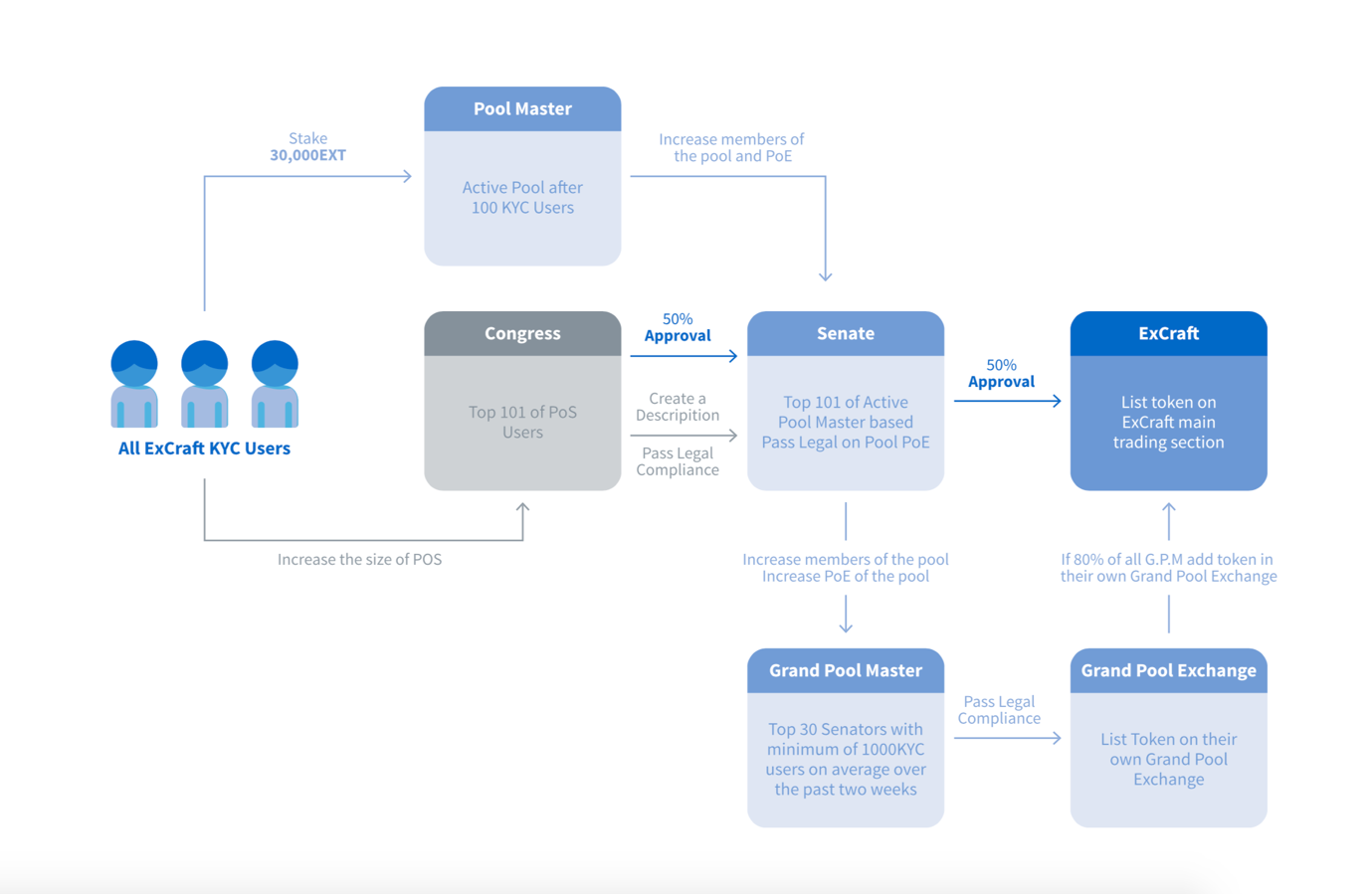 An Innovative Approach to Rewarding Users

ExCraft will create an initial decentralized service by rewarding users based on “Proof of Existence” (PoE). The ExCraft platform will introduce three separate ways to reward users for their activity, with its own ERC20 compatible EXT token. The reward system is designed to sustain the EXT token economy ensuring value redistribution and increase over time:

This innovative trifecta of user activity reward possibilities puts ExCraft a step ahead of other exchange as it values all users based on a meritocracy system totally new to the industry.

Unparalleled Reliability and Security by Design Powered by Cloud-native Microservices

The ExCraft Exchange Platform is implemented in Google Compute Platform, custom built to support both security and performance. The cloud-native exchange platform is architected to be both modular and scalable by utilizing docker for encapsulating key components into a set of microservices managed by Kubernetes.

Unlike many traditional monolithic centralized exchanges, the ExCraft architecture promotes performance by allowing the exchange to quickly add additional resources and changes in functionality with minimal to no disruption to any existing trading activity. The exchange platform has been tested to support thousands of trading pairs with an overall capability to support tens of millions of transactions per second.

The ExCraft platform utilizes docker not just as a means to bring operational efficiencies but also to reduce security risks by compartmentalizing critical services through network isolation and resource management. Should a vulnerability be found in one service, ExCraft uses hardened docker containers with Kubernetes to enforce “deny by default” to reduce the possibility of an attacker using a compromised service from accessing another service.

ExCraft is registered in Hong Kong with the support of the Hong Kong Science Park, and invested in by Collinstar Captial, Eagle Fund, BXTING, RC4. The project is spearheaded by Roy Lam kt, CEO, and early bitcoin investor, investment fund manager and celebrity in high IQ and memory championships. The technical architecture of the exchange was developed under the leaderships of CTO Benjamin who brings over a decade of experience and multiple patents from working as Senior IT Architect and CTO at various blue chip tech companies.