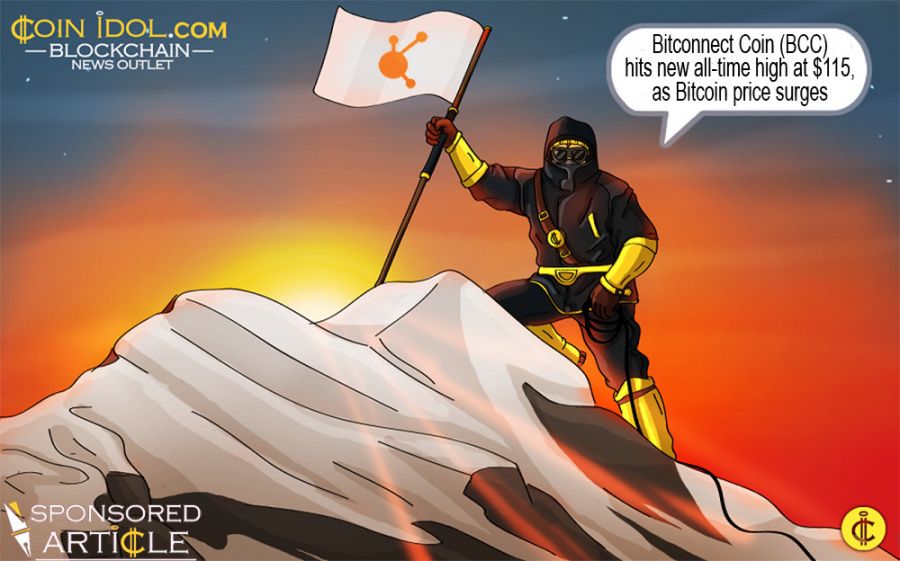 Throughout last week, during the strong rally of bitcoin, Bitconnect Coin (BCC) gained upward momentum, surpassing the $100 mark for the first time in history and establishing a new all-time high at $115.

According to cryptocurrency market data providers including Coinmarketcap, the trading volume of BCC peaked at $10 million, reaching a market cap of $742 million and a price of $115.

Over the past two weeks, the price of bitcoin continued to reach new highs primarily due to the imminence of the activation of the Bitcoin Core development team’s scaling solution Segregated Witness (SegWit), increasing adoption from institutional investors and rising tension between the US and North Korea, as investors seeked for safe haven assets to protect their wealth from economic uncertainty.

Naturally, as the value of bitcoin increased, BCC followed its upward trend. A rising number of bitcoin traders and users started to demonstrate growing demand towards BCC.

In the upcoming weeks, as adoption from institutional investors continues and large-scale financial institutions including the Chicago Board Options Exchange (CBOE) pursue their plans of integrating bitcoin, the value of bitcoin and BCC will likely rise at a consistent rate.

CBOE, the largest US options exchange with an annual trading volume of 1.27 billion contracts, is set to integrate bitcoin within 2017. CBOE CEO Ed Tilley wrote:

“We very much look forward to responding to the growing interest in cryptocurrencies through the creation of bitcoin futures traded on a regulated derivatives exchange, with the many expected benefits that this brings, including transparency, price discovery, deep liquidity and centralized clearing."

As liquidity for bitcoin trading and opportunities for major investors rise within the bitcoin sector, leading cryptocurrencies like BCC that offer services related to the main bitcoin blockchain will highly likely see mid-term success.

In addition to the rapidly growing value of BCC, it is important to acknowledge the depth of the BCC market. Bitconnect has a substantially high daily trading volume of $9.2 million, which is significantly higher than that of Waves, Lisk, Augur and Golem, prominent cryptocurrencies that have been around for a long period of time.