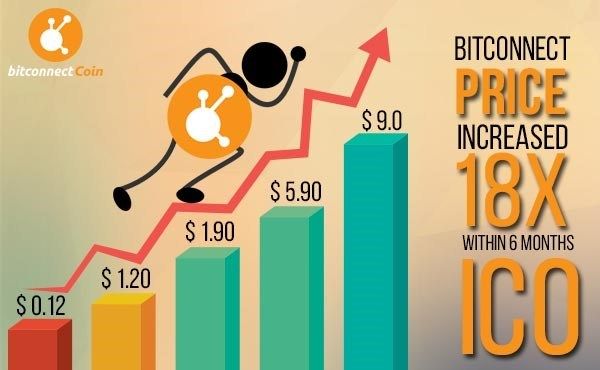 May 12, 2017, Ashford, UK – UK-based cryptocurrency start-up BitConnect has announced an 18x surge in the value of its BitConnect Coin (BCC) cryptocurrency. In a span of six months following its ICO in November 2016, BCC has risen from $0.5 to $9 per unit. Following the momentum of Bitcoin, BCC has maintained its upward trend and is projected to continue its growth trend throughout 2017.

Like Bitcoin and other leading cryptocurrencies such as Ethereum Classic, BCC has a fixed monetary supply of 28 million. BCC is a deflationary currency, and because of the limited supply, the price of BCC is expected to rise as long as the demand is met and sustained. However, the continued increase in demand for BCC as the supply remains fixed ensures a constant rise in the cryptocurrency’s value over a long period of time.

Currently, around 6 million BitConnect Coins are in existence with a significantly large investor community, which includes many avid BCC community members from Asian countries. The BitConnect team is witnessing a rapid proliferation of BCC throughout various countries within Asia, and on a long run, they hope to witness a similar trend in rest of the world as well. The team is heavily involved in raising a prolific worldwide BCC community and expects its effort to bear results in the near future.

With a market cap of $49.7 million, BCC is one of the leading cryptocurrencies competing with other innovative altcoins such as Lisk, Ardor, and Iconomi. In fact, the current market cap of BCC is larger than that of Iconomi, which very recently raised over $10.5 million in its first ICO.

BCC’s consistency and rapid increase in price have triggered the interests of many investors in the cryptocurrency community over the past few months. An increasing number of traders and investors have begun to enquire about the optimal period for investing in BitConnect Coin.

Based on BCC’s six-month trend, May and June could be the best time possible to invest in Bitcoin for two important reasons: an explosive growth of the cryptocurrency market and the short-term downward trend in BCC.

Although BCC has enjoyed a massive half-year growth since January, the price of BCC fell from April 1 till early May. However, the price of BCC has already started to bounce back, and it is in the process of rebounding to its previous all-time high of $15

Tags
Bitconnect Bitcoin ICO Value Cryptocurrency Price Community Million Market
Most Popular
May 16, 2021 at 11:30
News
3 Reasons Why Payment Service Platforms Switch to Blockchain, Facilitating the Adoption of the Tech
May 16, 2021 at 10:35
News
Chainlink Rally Stalls at High of $52 as Altcoin Retraces for More Upside Momentum
May 16, 2021 at 09:29
News
Uniswap Range-bound Between $36 and $44, Attempts to Breach Recent High
May 15, 2021 at 12:40
News
Low Orbit Crypto Cannon LOCC Lottery Draft Occurs Every Hour | Stake Once to Enter All Upcoming Drafts
May 15, 2021 at 11:20
News
Dogecoin Resumes Fresh Uptrend as Buyers Recoup Above $0.40 Support
More