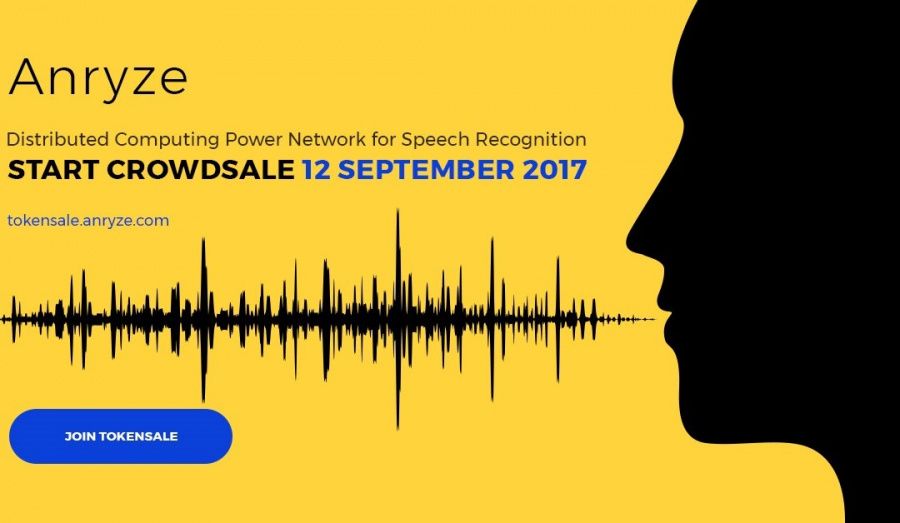 Anryze, the company behind a blockchain platform designed for speech recognition and analysis, has announced it will hold a token sale to develop its product and expand into new markets. The founders of Anryze aim to sell 300 million RYZ tokens for a total of $6 million (USD). The crowdsale is scheduled to begin on 12 September.

August 30, 2017, Moscow Russia – Anryze, the company behind a blockchain platform designed for speech recognition and analysis, has announced it will hold a token sale to develop its product and expand into new markets. The founders of Anryze aim to sell 300 million RYZ tokens for a total of $6 million (USD). The crowdsale is scheduled to begin on 12 September.

Anryze’s speech-to-text service currently works with Russian and English audio. After the token sale, the company plans to begin work on adding Chinese, Spanish and German languages, making efforts to expand into the relevant markets in parallel to this development process.

The RYZ token acts as an internal currency, which the company’s customers can use to purchase speech-to-text services for a given duration of audio. The cost of one token is initially equal to one minute of audio processing. With a growing customer base and an increase in the number of minutes processed, the cost of a token will correspondingly grow, since overall token supply is fixed.

In addition to this demand-based growth in price, Anryze’s tokens will provide holders with a share of the revenues from every transaction processed by the network. 20% of the fees for audio processing will be distributed proportionally among token holders.

“We believe in the future of our technology since it allows us not only to compete with global giants such as Google and IBM, but also to surpass them thanks to our dramatically lower prices – we charge around a third as much, without loss of quality. The market shows growth of 12% annually, and even without the growth of our existing customer base, we anticipate an increase in transaction volumes of 5-7% monthly. We are already working with American brokerage houses, and we are currently conducting negotiations in Russia. Our market is in its early stages and still establishing itself, and its potential is yet to be fully unlocked.”

Anryze is a company engaged in the development of a blockchain service for speech recognition and analysis. The company was founded at the beginning of 2016 by Anton Gerasimenko, Mikhail Yezhov and Oleg Zaychuk. Anryze’s speech recognition experts have an average of over 5 years of experience.

In February 2017, the Starta Accelerator investment fund bought 7% of shares in the company for $130,000, estimated the company at 2 million USD. There is established market demand for speech recognition and analysis, and the sector is currently occupied predominantly by Google and IBM. Thanks to its use of blockchain technology and neural networks, Anryze can offer a competitive product at a price that is 2 to 3 times lower than its counterparts.

American brokerage agencies are the platform’s initial customers. New customers are not currently being connected to the platform due to technology updates.

Anryze is the source of this content. This press release is for informational purposes only and should not be viewed as an endorsement by CoinIdol. We take no responsibility and give no guarantees, warranties or representations, implied or otherwise, for the content or accuracy.  Readers should do their own research before investing funds in any company.